happy sunday! (is it still sunday in your corner of the world?)

we had the most delicious early morning driving a little way east (not far at all) at 07:45 hours to see Richard and Diego for an 0800 hours breakfast (freshly ground coffee, slim morsels of multigrain toast with a generous spread of marmalade from a garden business we shall be writing about soon when Richard sends us the interweb-link and strawberries).

and a photo session!

you see we’ve been seeing a picture in our mind’s eye of a golden dog and his owner:

partly inspired by Heather in Arles

and also by Bill Blass (we adore Bill Blass and wrote about him, it seems at some length, here)

we had a notebook many moons ago (possibly 10? *vaguelooktocamera*?) 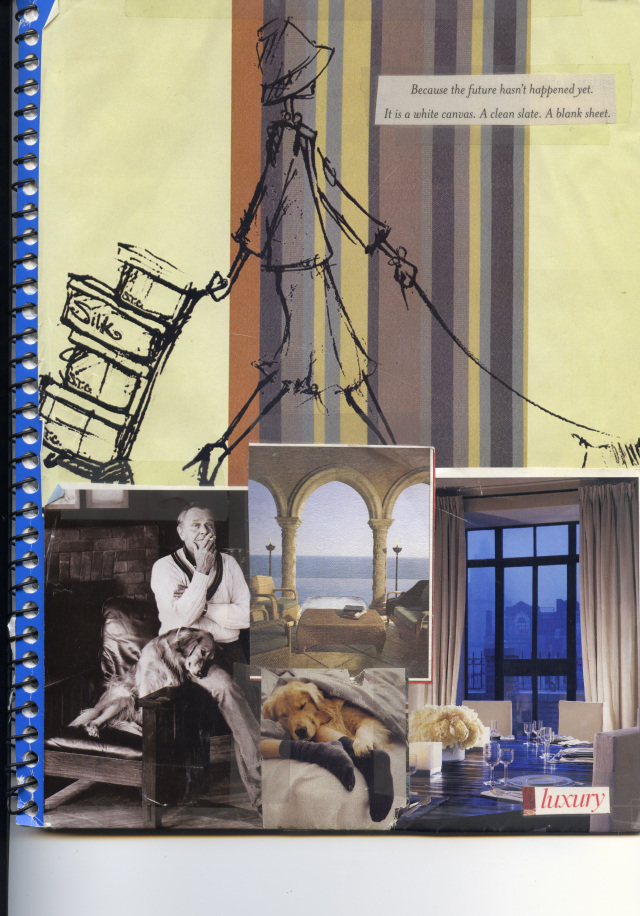 note the lovely Bill Blass shot with his golden dog and also the lovely one asleep in the bed next to it (not Bill Blass, as far as we know).

now we love having a friend like Richard because he got it instantly we said “Bill Blass and his golden”.

so we popped over there today – had a light breakfast together (Diego was patient and waited, as per the rules) and then we drifted out to the back garden and took these. 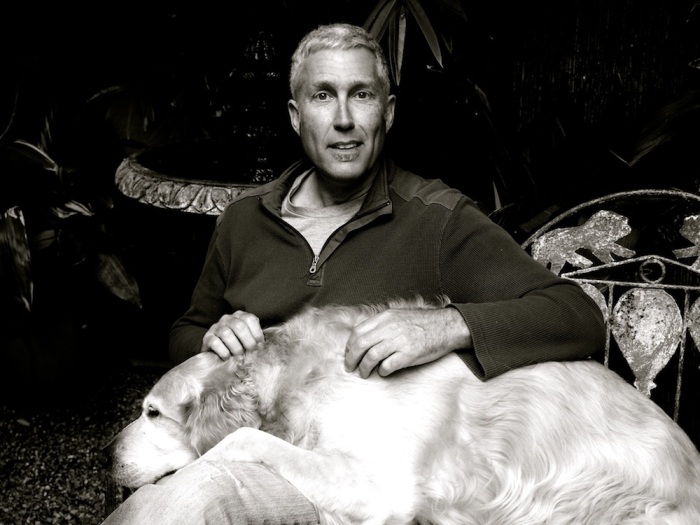 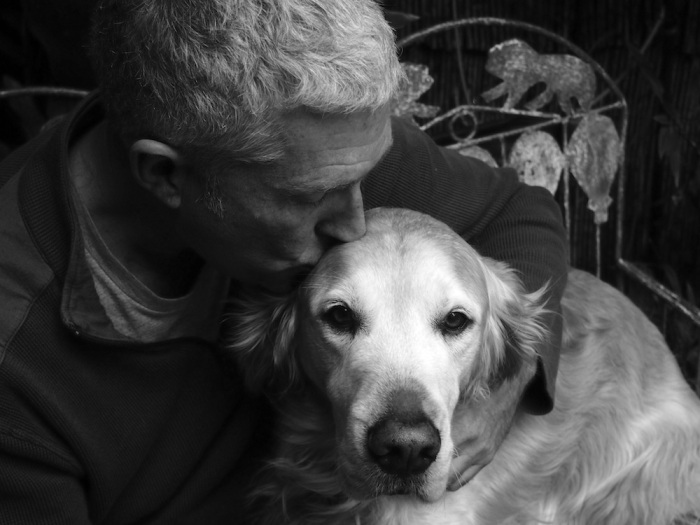 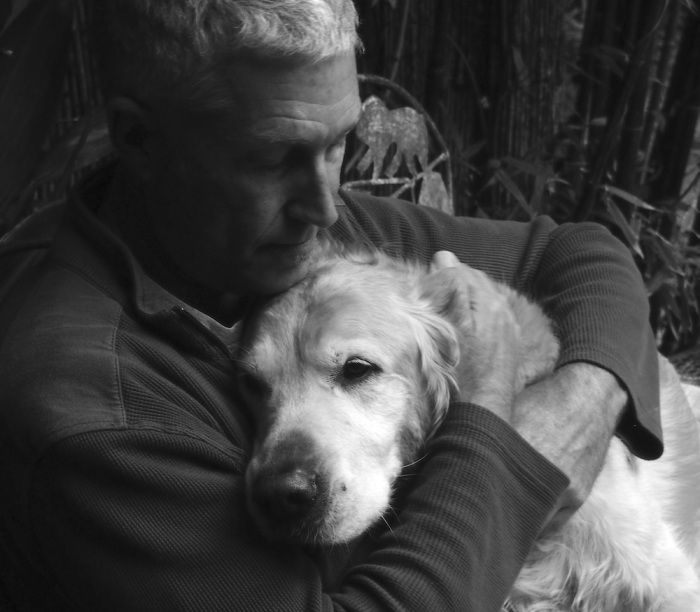 thank you ever so much, you two.

just the sort of pictures Bill Blass would have framed (in something surprising yet vintage and possibly Venetian) we are sure.

we need to take a Nap (in fact we dozed happily all the way back in the car – gosh – no – we were Not Driving) but really wanted to share the photographs with you now, before our friends in Europe turn in for the night.

after a Most delicious brunch (and some sipping of coffee in the kitchen and patting Diego, the beauteous golden) we were Off – to the Huntingdon – George and Richard – both chaps in Oxford blue shirts – Richard in a fine hat – teamgloria in pearls (it was Easter Sunday today after all) and white linen and a sky blue pashmina (no pictures of Us, but we wanted to give you a Visual). 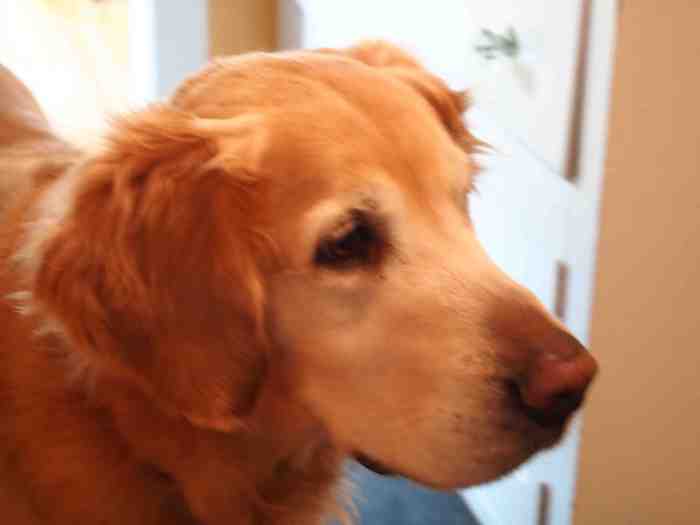 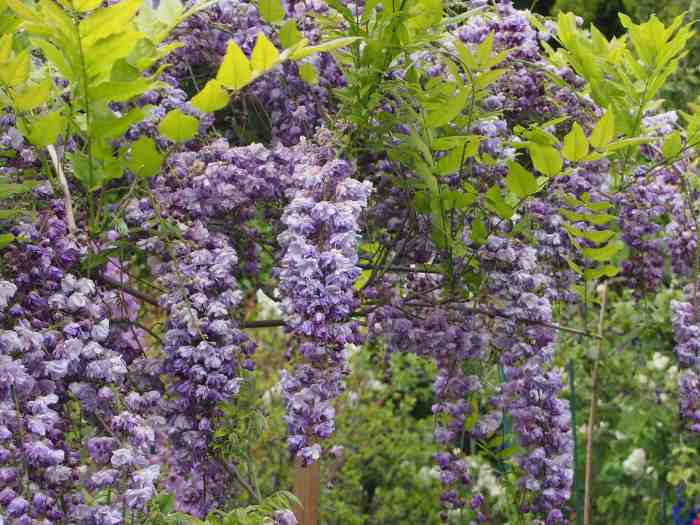 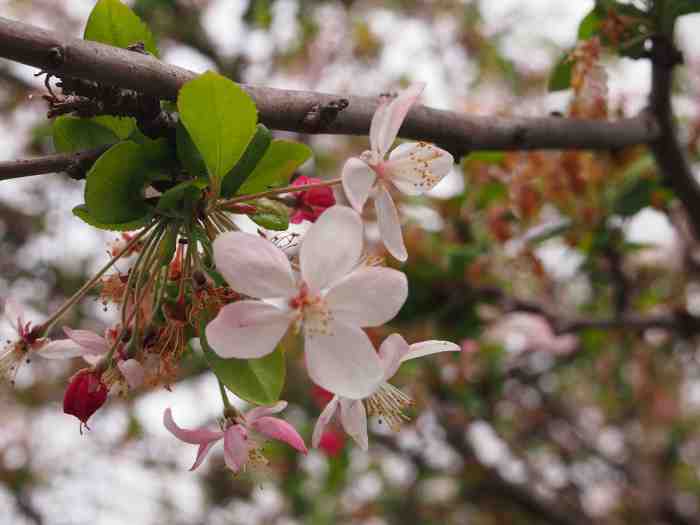 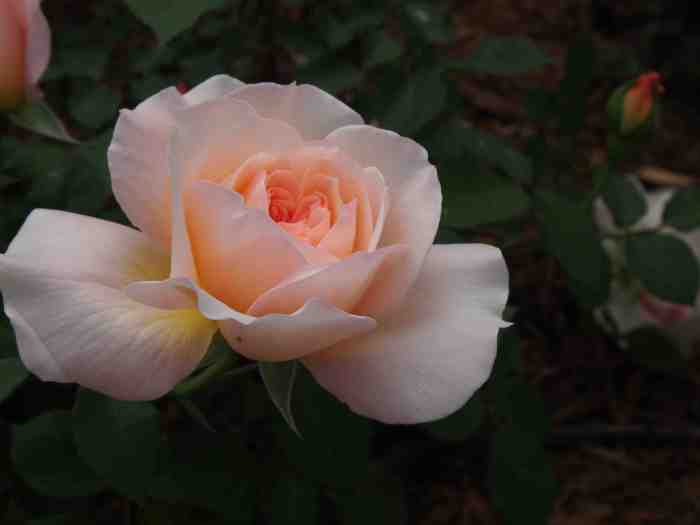 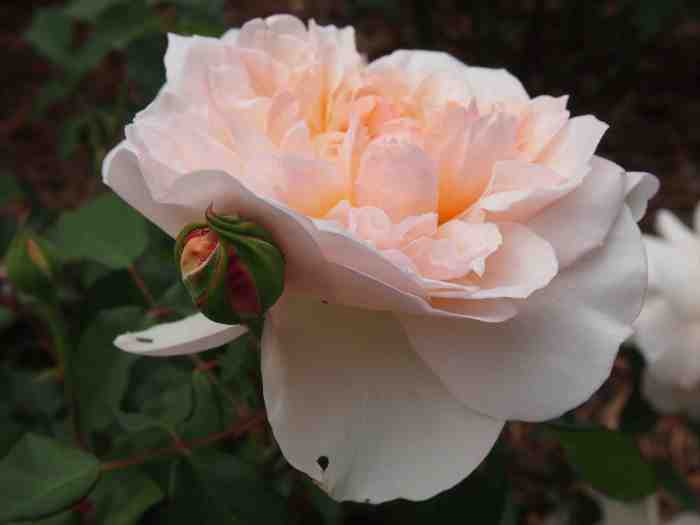 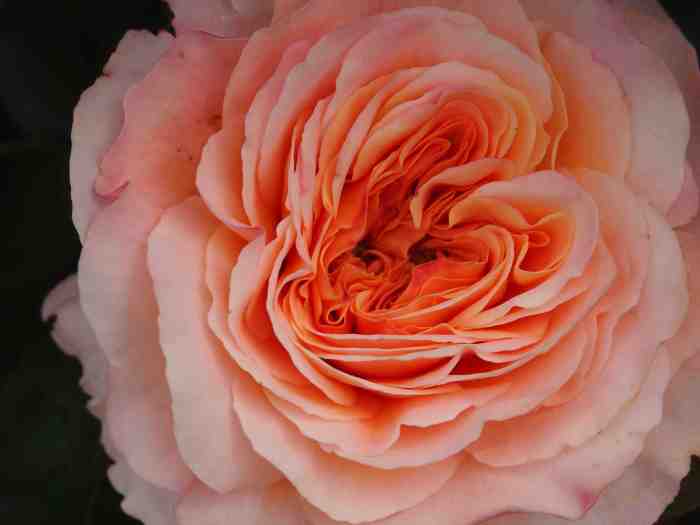 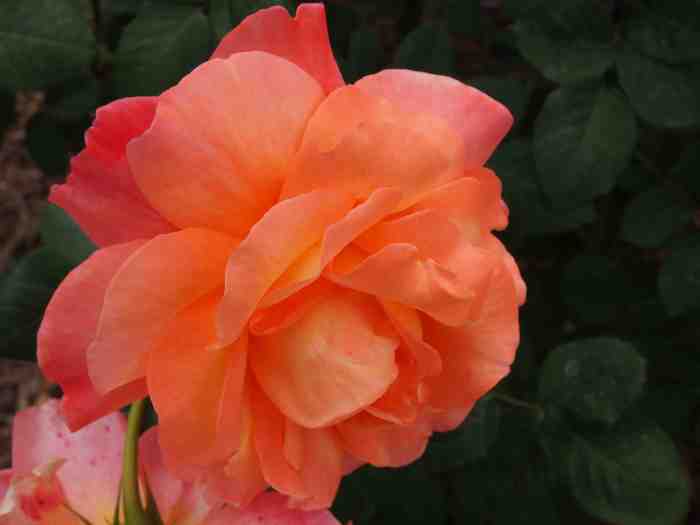 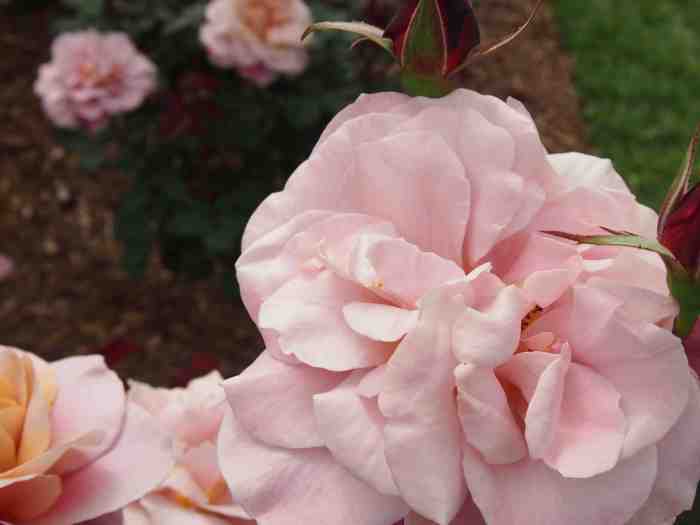 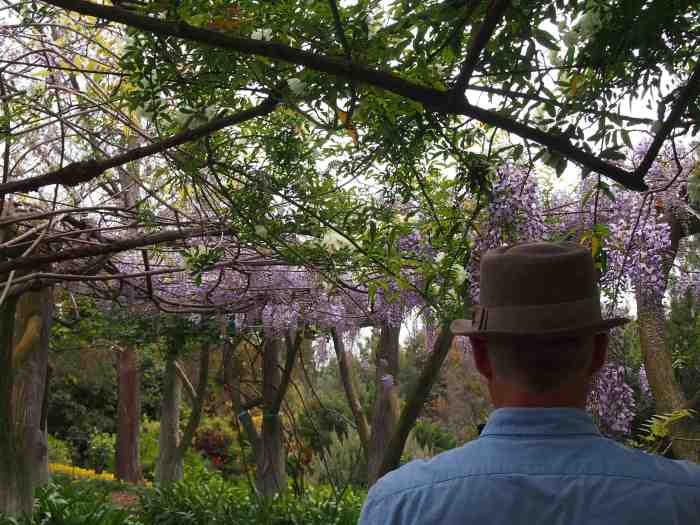 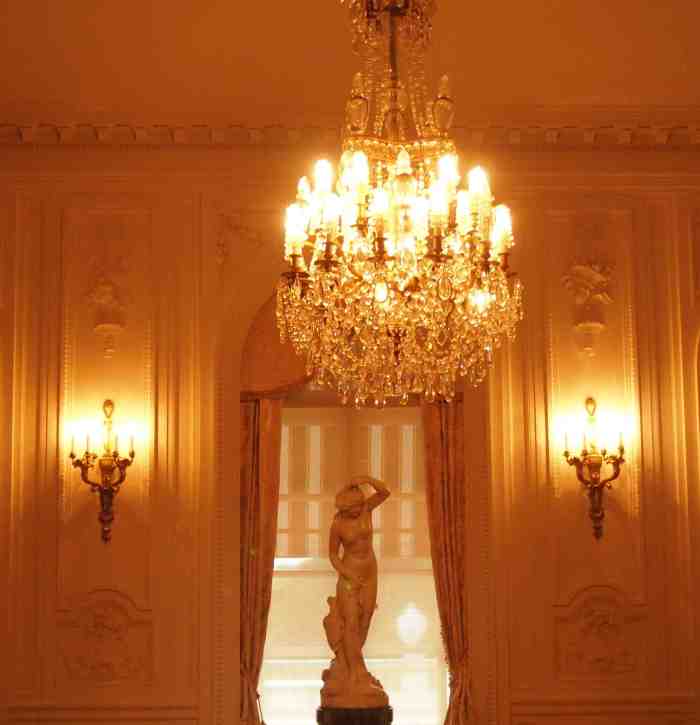 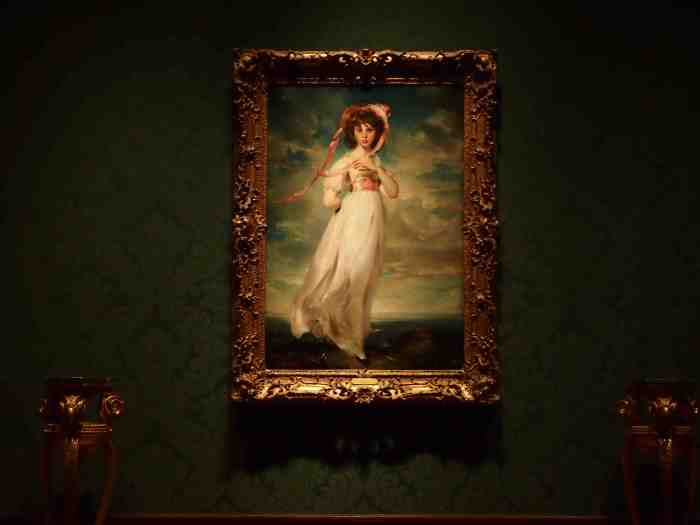 all roses and chandeliers and 18th century paintings – all in all, the perfect Sunday.

did you have a delicious day today, darlings?

something roasted with root vegetables?

a walk in the country?

were You at the huntingdon too? – so sorry we missed you – oh, you were in the tea room? lovely.

before we pop the kettle on to make a Pot of tea and then have a quick nap before our evening’s engagements…….we wanted to show you where we’ve just been.

but we are not Sure we can tell you where it Was.

we offered Picture Approval to the Head Gardener who gave us a delicious preview of a splendid Garden not yet open to the General Public (so Chic – and we had to carry a hard hat as well) and he airily said, “no need” but we forgot to say “can we say where we were?” and so we’re going to Keep Quiet about where-we-were but if He wants to pop a little comment in the comment-field (hint) to say it’s Quite OK to do so – we’d love that.

UPDATE: he said yes (see comments) – we were Here!

for now – flowers – flowers – blooms – trees – leaves – sunlight kisses on Live oak trees and  sunbeams on swift and vocal hummingbirds and one delicious Drowsy Bee nourishing itself inside a fully flourishing floral delight.

after the garden pictures, we have provided a helpful (or what we Hope is helpful) link to Vita Sackville-West’s Gardening Diaries from the late 1940s to early 1950s – just to add contrast and depth and because we were so overawed by the beauteous garden that we don’t quite know what to say that would be better (plus you May recall that we Share a birthday with Vita in RL…….just saying…..). 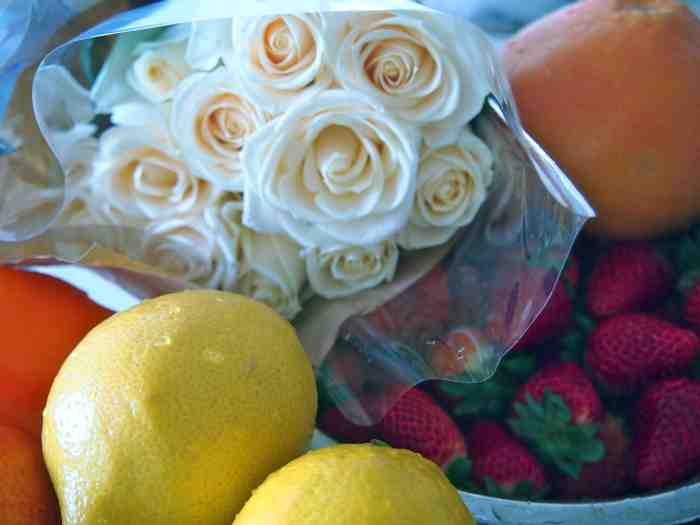 firstly – the bounty from the Farmers’ Market – aren’t those creamy-white roses so Terribly Syrie Maugham? 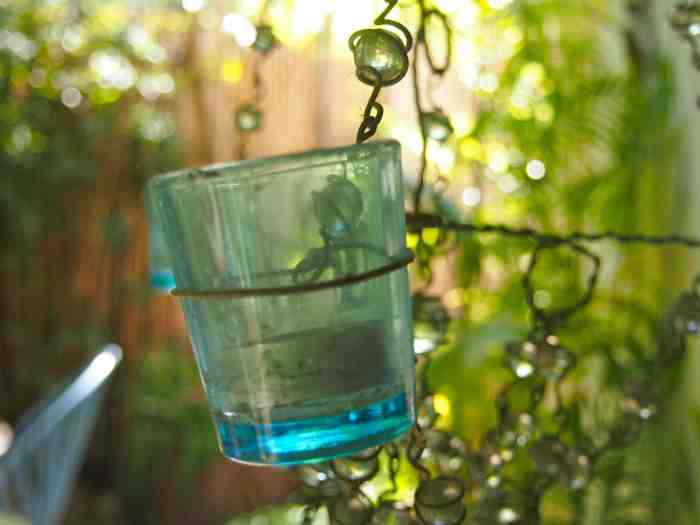 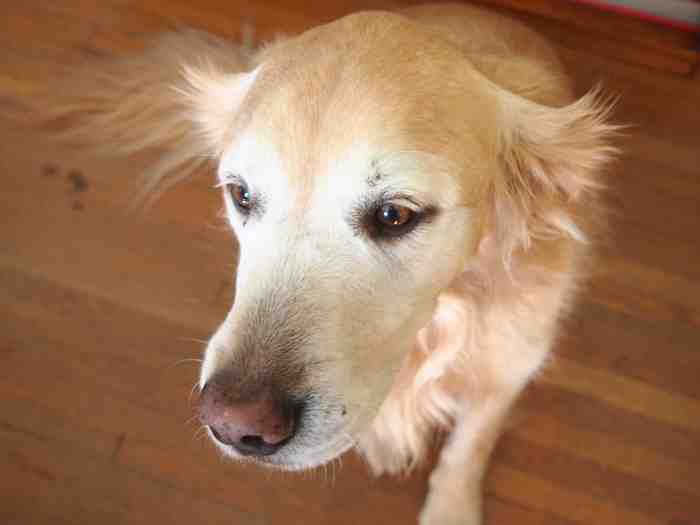 the most delicious golden (in Southern California). 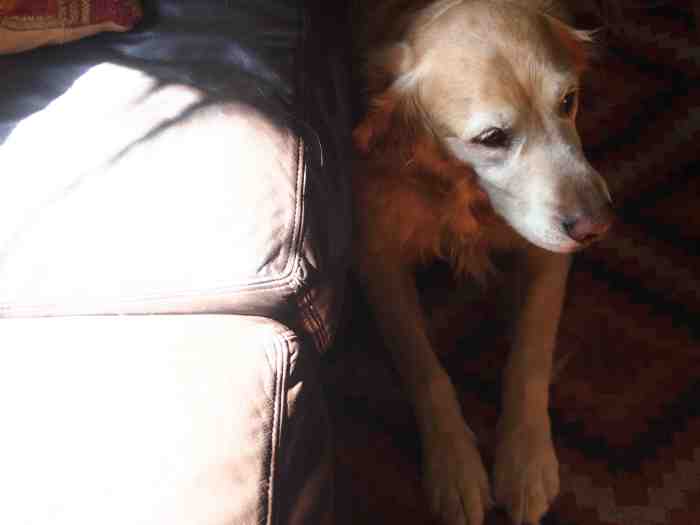 who nestled down by the elegant and pretty Raffish brown leather couch as we all had brunch and talked at the sunny table nearby before piling into a large motor vehicle and being driven to where-we-cannot-say.

the garden (in Preview mode). 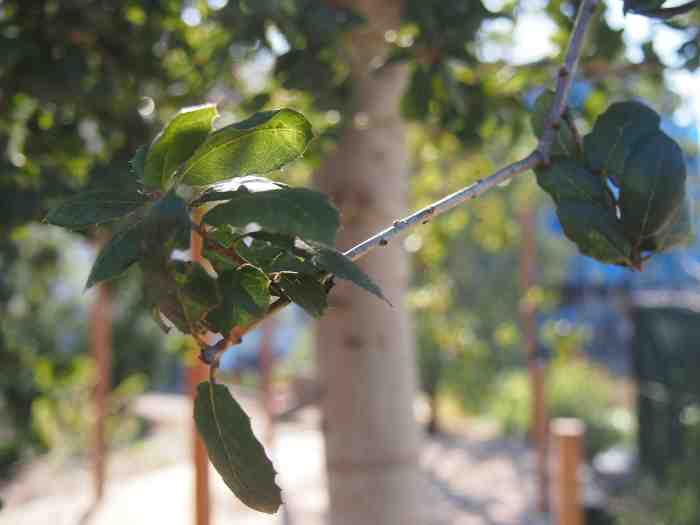 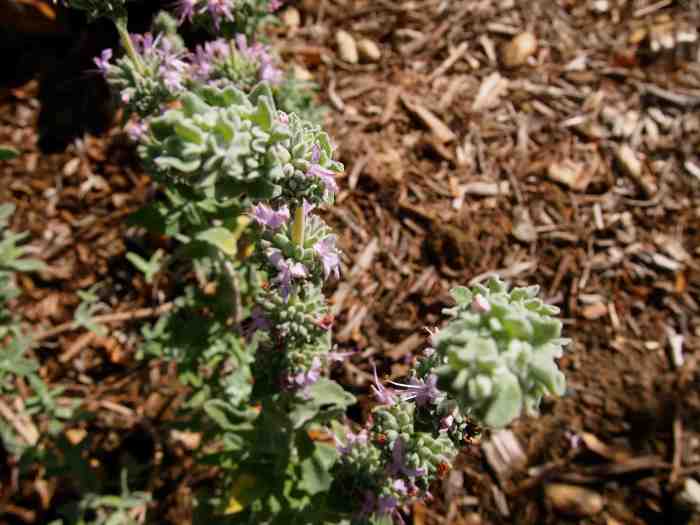 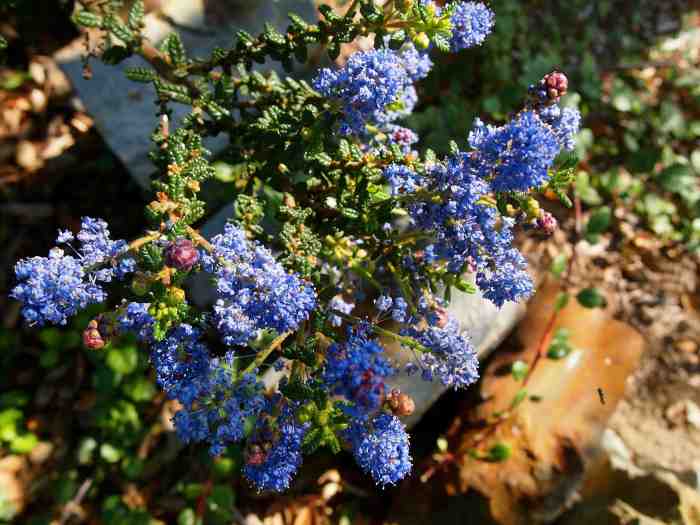 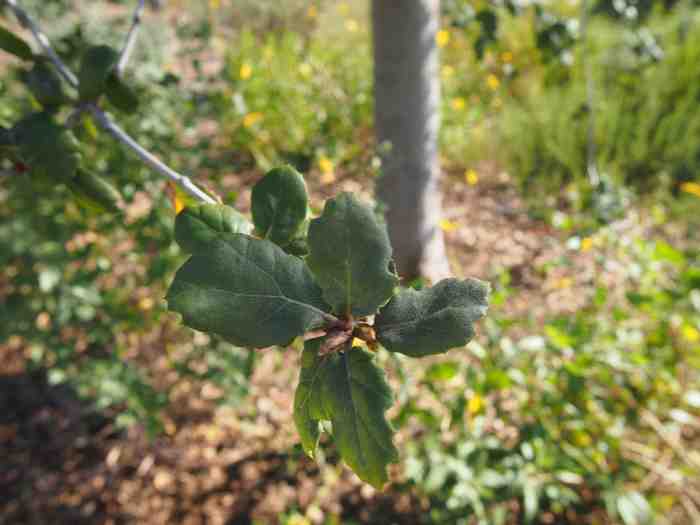 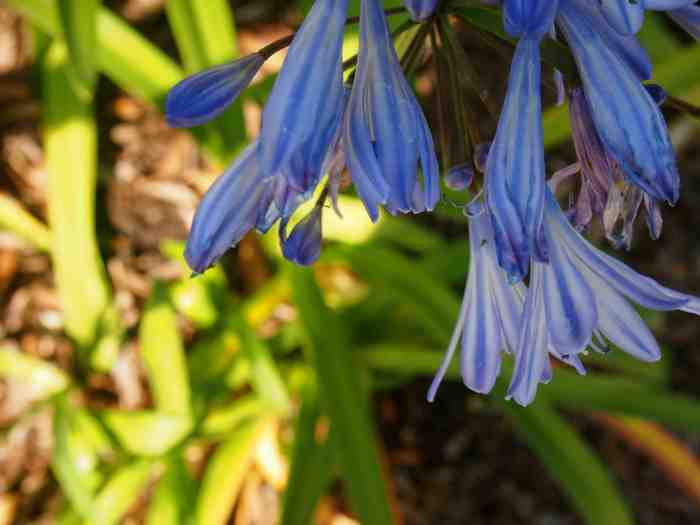 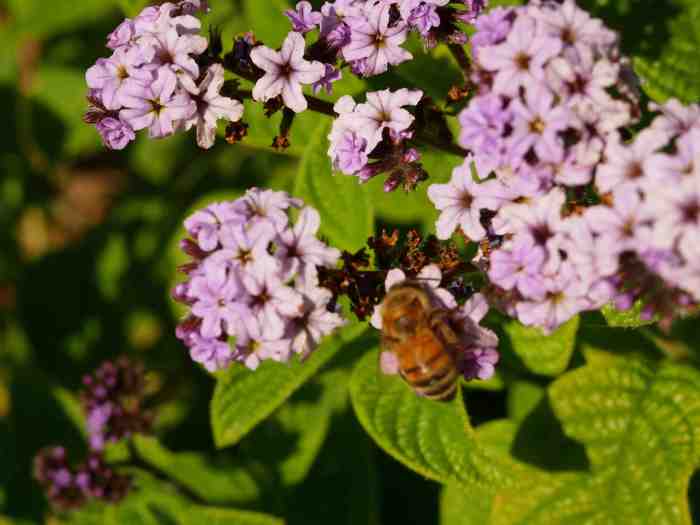 as promised – a drowsy bee sipping (does a bee sip?) pollen. 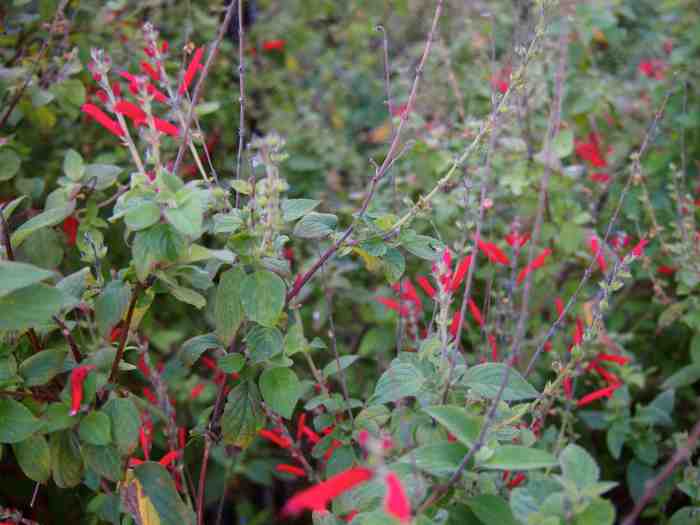 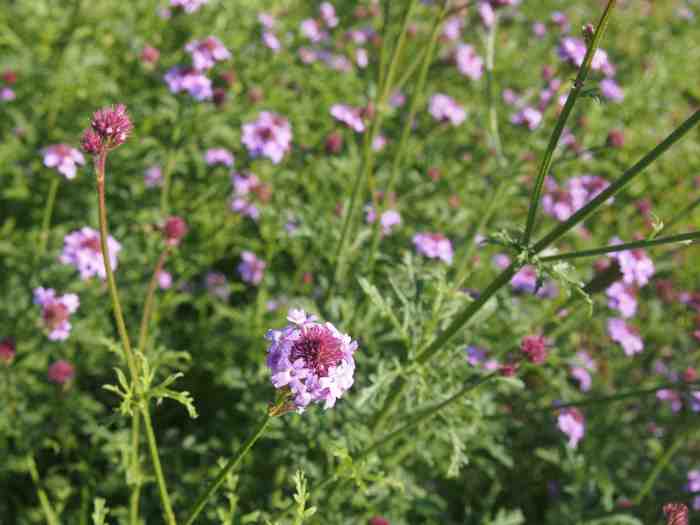 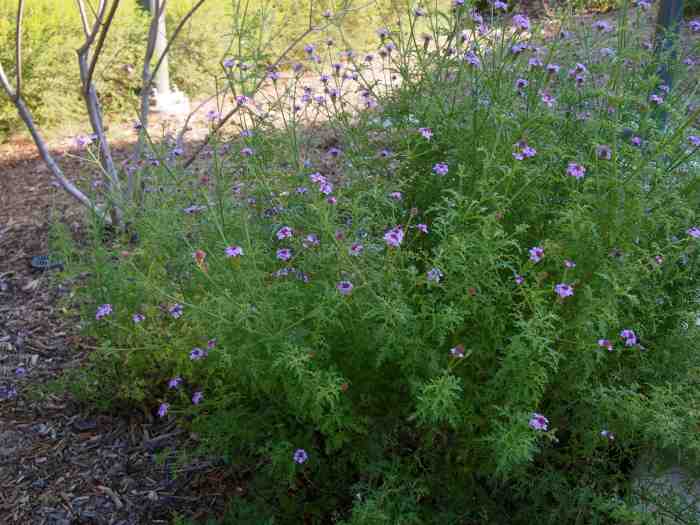 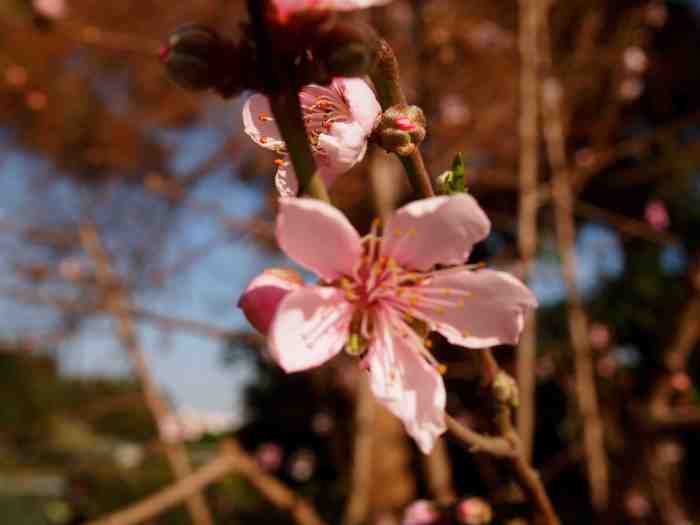 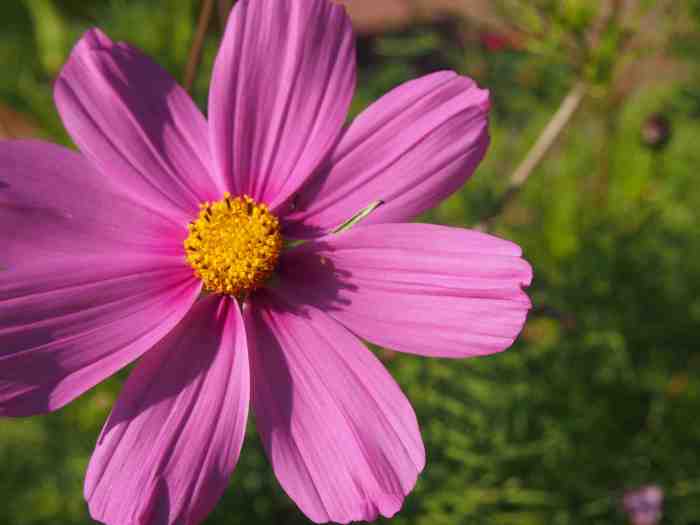 and now for Vita:

we must remember, of course, that February in England in those days (and now, we hear) was Very cold and the plants would be grasping different soil and probably hibernating waiting for signs of Spring.

and now to Nap with newly-minted memories of gardens in preview and dreams-of-gardens we may plant ourselves (or get a lot of help with from People who Know) in the Future.

did you have a nap?

it’s always a good idea on a sunday, especially when one has been In The Garden, darlings.