it was SUCH FUN being in our first magazine shoot!

we drove to a secluded inn far down the coast into the gorgeousness of Malibu (don’t you just adore the word Malibu?)

and the kind, talented, welcoming crew were waiting for us: there was a fancy photographer – a lady one – very modern, a stylist with a rack of clothes and suitably constrictive underwear – for us to wear – and a steamer and a clever silk scarf so we didn’t get the clothes smushed because Yes! there was a make-up and hair artist and she made us look all pretty with lipstick – so strange – we don’t own one in RL – and an Assistant who had excellent taste in music mixes and told us jokes to make us Laugh on the Beach (that was the shot they were all going for).

we tried on clothes (and were Not Allowed to wear black) – the magazine had specifically asked for bright colo(u)rs* so it’ll be strange and yet wonderful to see this peacock self when the magazine goes-to-press.

*the last time we wore “something in coral” was probably at boarding school (the “summer” – quotes used advisedly, twas England after all, we Froze) dresses were white with coral splodges or perhaps tiny flowers in a Victorian style bell-skirt with fitted bodice (agony for burgeoning breasts) and tiny buttons and pasty legs (no fake tan allowed). Or we also had to wear that coral/pink voluminous skirt for our saturday job in the shoe department at Miss. Selfridge in the Churchill Square shopping Centre.

and the poor shiny patent leather (black) doctor martens shoes had to stay in the Inn as well – we took ballet flats (which we have Not worn since April 26th 2012 for a then-day-job-event at the Casino in Madrid) – black – of course – but they did not appear in shot as they liked our lilac toes instead.

and this is El Matador State Beach – there is not a State called El Matador – at least not in Los Angeles – but some of the beaches in Malibu are private and this one is State and thus open to all (but if you’re doing a professional photo shoot you need a Permit and so the Crew had one with them to show an Inspector just in case).

we frolicked in the sand, walked slowly towards the camera, did lots of sitting on the sand and smiling (soft smile, shy smile to giggling and then a broad laugh – all the Options, you see) and generally doing what the magazine needs – a happy English person living in L.A who got sick, walked away from a corporate job and wrote a book and is now having a splendid time – that’s the shot they needed.

and we were happy to do so.

how did we know how to behave in the shoot?

well. we have Studied how to do this by watching others.

but secretly we just pretended to be Diane Keaton. 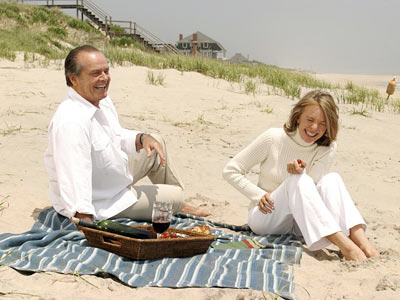 because she has the right sort of laugh/look for the beach.

especially in Something’s Gotta Give where her character is a writer and has the Most Glorious House and triumphs through pain and into the light.

that was our motivation.

and the crew completely got it.

which is why we’re Never Working With Anyone Else (because we hope there’ll be Lots of Shoots in the Future).

the landlords (yes, we rent – haven’t taken the home owner plunge as yet – no idea where we want to live when we’re grown up, you see – apart from the Motion Picture Retirement Home, eventually, because it sounds like enormous fun) sent round someone to photograph the apartment.

you know, to List It (which means Strangers are going to be tramping through our space to see whether they feel this apartment is Right for them – sigh).

we sat at the long farmhouse (french-style) table (which is actually called Big Sur and yes, we bought it not just because it’s beautiful but the whole Big-Sur-Henry-Miller reference tickled us too) and stared nonchalantly into the middle distance and moved each time they said we’d be in shot (which was necessary because we don’t actually Come with the apartment and that would be False Advertising).

we did make our bed. and tidied away all of the belongings that feel precious and not-to-be-photographed (oh god, are we going to be stuck up in an estate agent/realtors’ window? horrors.)

but it felt so Invasive.

and yet we’re being Practical (for once).

they need to re-rent it.

we are going to Move.

this is what needs to Happen. 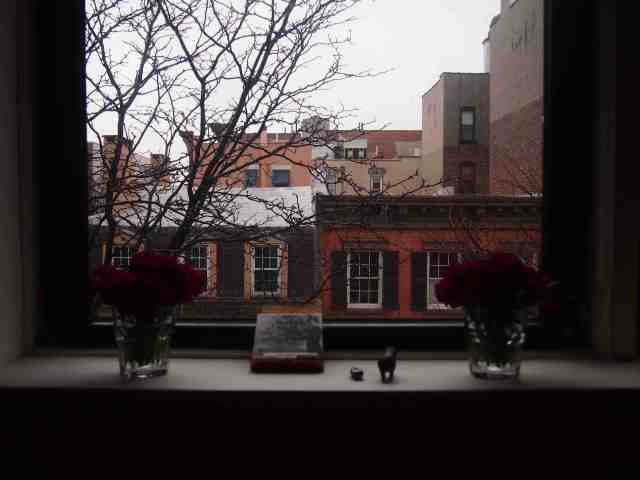 and we’ll like it Even Less when potential suitors for the apartment come to call in the early days of January 2013 to look around.

Unless they are gorgeously Fun and interesting and we decide to make a new friend. 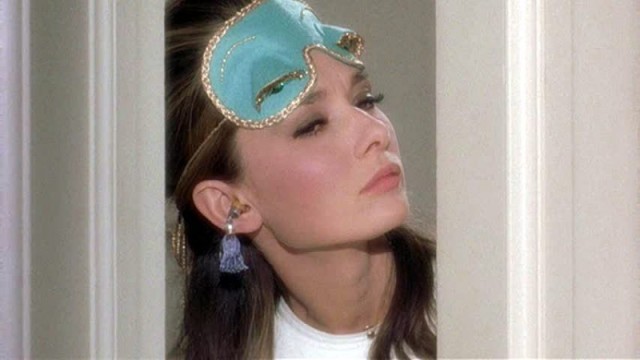 you never know………Deeply Interesting characters have lived in Manhattan since the dawn of excellence and beauty.

this is a Beautiful apartment!

we murmured, trying not to get into a conversation.

why are you leaving?

we looked out of the window and for a moment couldn’t remember why.

it is ever such a long Story.

and Rather Soulful too…. 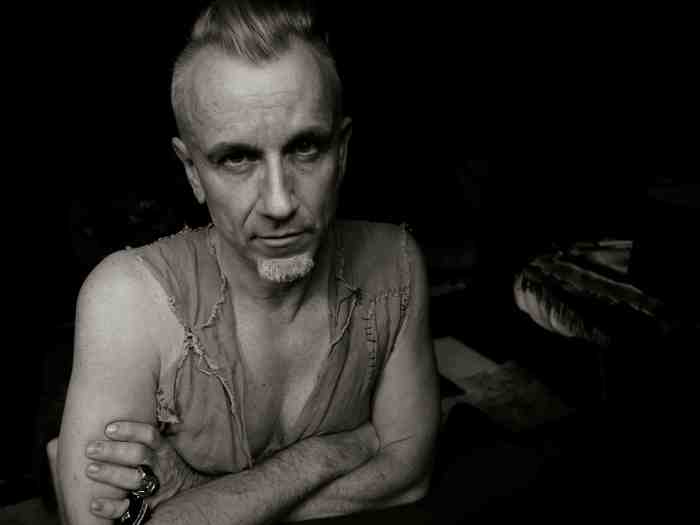 did you notice that we linked his name to Another Site on the interweb?

that’s because we asked Permission (we always do – and we give Picture Approval which we finds makes people relax – especially when we ask them Naughty Questions and they start to crack up laughing).

you see when we first sent a (very modern) text message to ask martyn if we could take his picture for our #eastcoastportraits sessions we said:

can we tell them who you are in real life?

because we adore martyn’s photography and he creates these Gorgeous Books, one of which we owned Years Before we met him and when we realized that he had taken all those delicious photographs we had perused and dreamed over during Very Long Nights of yearning and good-for-the-soul deep thoughts we were Quite Shy for a short while. 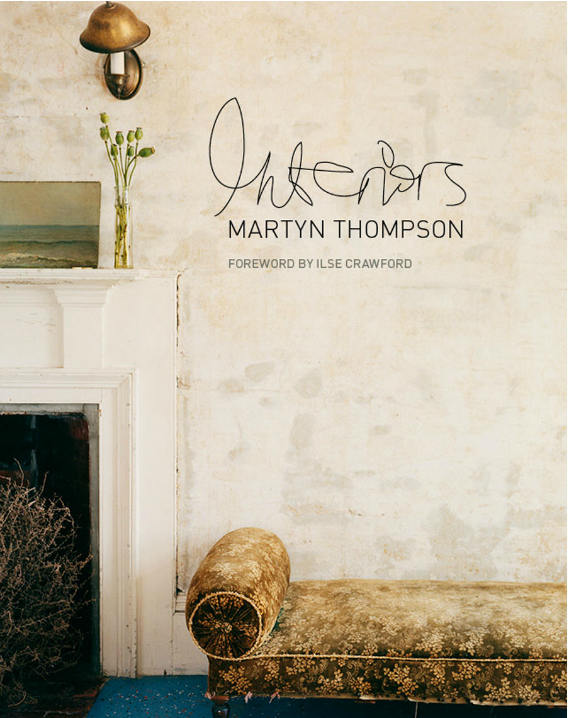 because martyn is both english – and grew up in the land down under where unfeasibly beautiful people live and thrive – and so the way he says the “arl” in darling is Extra special.

did you notice who did the introduction to martyn’s book?

a very quick side note about Ilse.

before we became teamgloria we lived in London and wrote a lot for newspapers and magazines (this was before the interweb mostly so we’re not linking to any of them As Yet – and also because some of them show our Extreme Youthful naivety.) Anyway, Ilse was the Founding Editor of the UK edition of Elle Decoration. One day we happened to be in her office and she said (from her great height – she is impressively tall, or at least appeared rather willowy and Head Girl like to us in those days):

“could you go and write about Shoreditch?”

and we gulped because in all those movies where the Understudy is asked: “Can you Ride?” they always say “YES!” or they don’t get to go on the Set and take over from Gloria Swanson or whomever has a cold that day and can’t appear in the Scene and then get spotted and become A Star.

but we had No Idea where Shoreditch was because, in those days, Shoreditch was, if you get our drift, Totally Nowhere (now, of course, we hear it’s Terribly Hip, but then – shudder – nope).

anyway, it was a lovely piece and we got all excited when we saw it in the magazine.

that was a long digression.

it is a bit nerve-wracking taking photos of a photographer but martyn was most kind and indulged us and didn’t look nervous that we didn’t check the light meter/metre/counterthingy Once (because we have a clever camera that does it for us you see) and we just kept talking and shooting and admiring the general glorious new-york-ness of his place…..with all the books and the paintings and the Art and the textiles…..

and the silk flowers and the lighting and the Huge windows and……Most Especially martyn’s shoe collection which is straight out of Alice-in-Wonderland-meets-Carnaby-Street-1979-love. 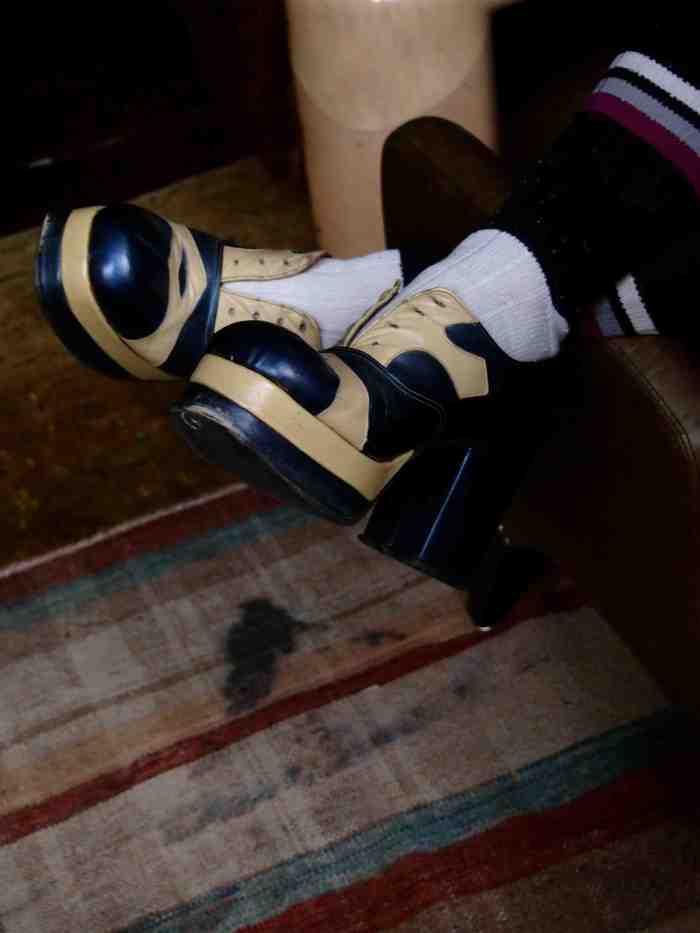 such a fabulous morning……… 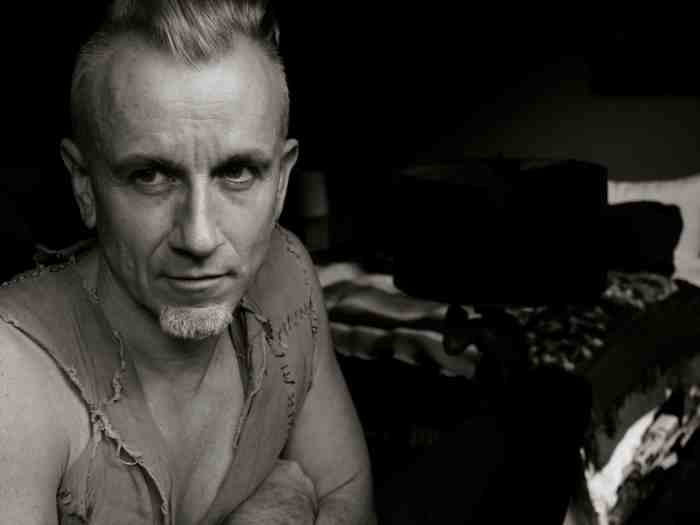 Beautiful people looking at beautiful photographs in a beautiful gallery. 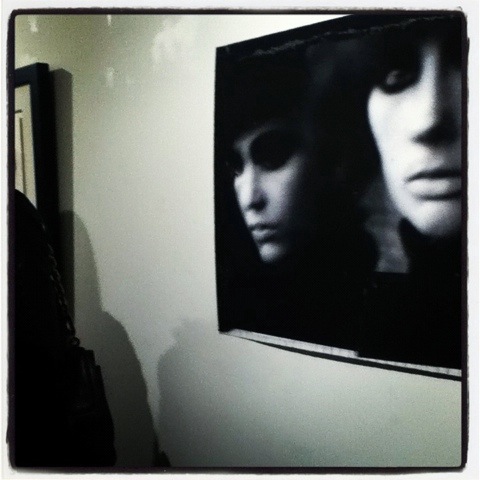 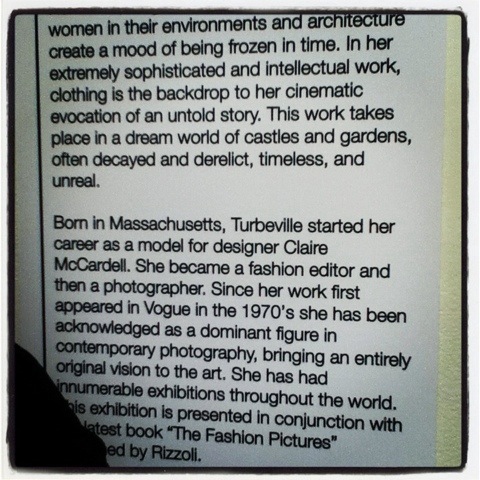 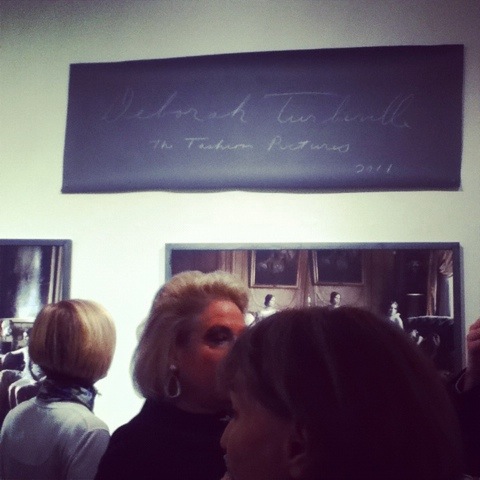 Deborah Turbeville was there (sequestered in a private room, doing press interviews).

Anh Duong (gorgeously imperious) was there.

She looks as glorious as she does in the shot on the wall from Vogue 1984 (draped in emanuel ungaro) – still vivid.

everyone else was in crisp 80s monochrome (Lots of bobs and white shirts and the odd matador pant).

It was the sort of private view where many glisten and shimmer under a generous spray of Elnet after a not-too-scorching deep bath, slinky with Chanel oils, before dressing in a creme silk slip and elegantly wiggling a stockinged toe into court shoes before exiting the town house into a town car.

Halston would have adored it.