we are feeling MOST restored by a mini break by the seaside!

and especially calmed by a morning in the Essex Street Pleasure Gardens over at William’s house – with a visit over the fence by Burt and Dottie – and a cheery wave from the clever landscape designer and his trusty mate from next door as they dropped by to pick up some fencing parts (for an actual fence – not a Duel at Dawn – it’s not that sort of a seaside Town, at least not for the past hundred years).

you didn’t even have to ask, love. 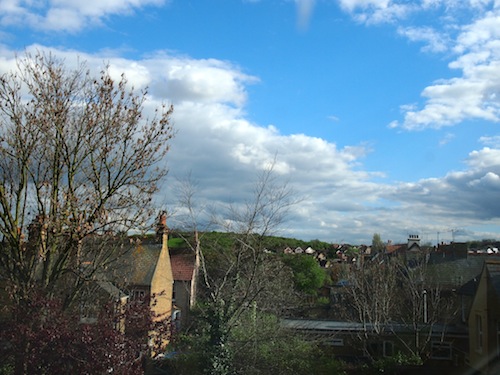 this is the view from the top of the house in the Herne Bay Suite – and lovely it is too. 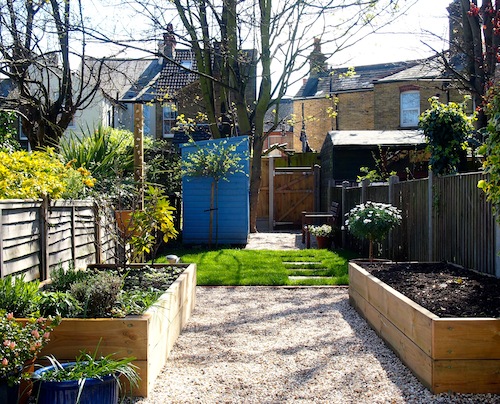 here is the Essex Street Pleasure Gardens in all its springtime glory (note grecian blue shed – a lovely touch).

a walk to the shops; an armful of english newspapers and a pot of tea enlivened the spirit still further and calmed the nerves.

this is Dottie (on the left, not the daises, those are called Marguerite).

this is Burt (who appears to be wrinkling up his nose in some anticipation of his tea).

while this is William (reading the Guardian and being very intellectual and Thoughtful – mainly because there are few funny bits in the Guardian). 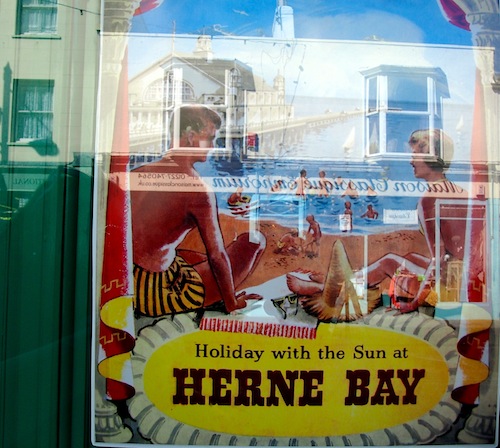 and this is a poster advertising the vintage delights of Herne Bay – it’s just down the Coast – not far at all – and a gorgeous drive in the bright Kentish sunshine – and so we did Just that shortish and most delightful drive after a (light) lunch.

here it is – Herne Bay itself!

with a Cerulean blue sea.

before we leave you (metaphorically) in Herne Bay…..we thought we might introduce you to one of its famous Lady Authors: Miss Evelyn Whitaker, who was born There in 1844.

her work is Most Charming – and – due to the magic of the interweb – much of it has now been “digitized” and is available to read on a new-fangled device – thus allowing Miss Evelyn Whitaker – who remained anonymous much of her life, asking her publisher to keep her identity secret – to reach forward through time and sit with us while we enjoy her Tales of the past.

Mr Clifford the vicar was accounted very lucky by the neighbouring clergy for having such a man, and not being exposed to all the vagaries of a young schoolmaster, or, perhaps, still worse, schoolmistress, with all the latest musical fancies of the training colleges. Neither had he to grapple with the tyranny of the leading bass nor the conceit and touchiness that seems inseparable from the tenor voice, since Mr Robins kept a firm and sensible hand on the reins, and drove that generally unmanageable team, a village choir, with the greatest discretion.

as Burt would say – if Burt could make his thoughts known.

he’s that sort of a smart Kentish cat you see.

another Airport – and another Island.

we’ll see you late Thursday evening from a new Location.

in the meantime (*happy_smile*) – COSMOPOLITAN picked our book as (one of) their pick of the week (if you’re feeling depressed)!