on our drive East last night, we pulled up to the bumper of the car in front at the traffic lights on Hollywood at Western, looked left and saw this Beauteous Building, grabbed the camera (tis never far away and yes, we were stationary) and then scribbled a note on the writing tablet that is near to hand (still stationary – very long lights at Western) and decided to Research it Later.

this being Later – we just have – and according to our friends-at-wikipedia it is:

Designed by S. Charles Lee, and built by Louis B. Mayer and Irving Thalberg, the building opened on December 8, 1928. The building was the first location of Motion Picture Association of America, Central Casting, the Hays Office, and The Ben Hecht Company.

you’ll recall the Hays Office was the one that had to sit through lots of cinematic treasures of the times and decide which were too naughty to be shown to the General Unsuspecting Public – which, great ironies abound, will tickle the ghosts that roam the halls because this building became something of an empire for – how can we put it – films-with-little-plot and lots-of-nudity in the licentious 70s

the art deco building reminded us that we had a book-on-loan back at teamgloria mansions from 1921 that we needed to return – so we made a cup of warm milk with a cinnamon stick and started to read….. 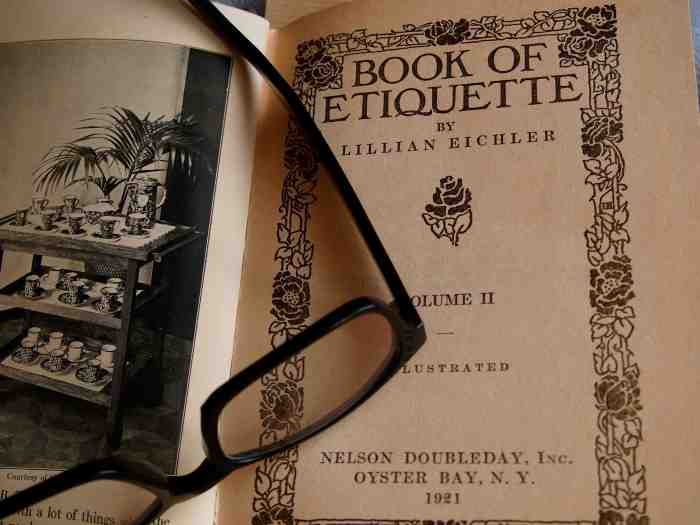 this tome was in the possession of an accomplished gentlemen who was recently moving to another residence, not far away.

a mutual friend had asked teamgloria to “drop by” and “help”.

we were a Tiny Bit Confused at this (as we don’t have a great many skills in the packing-and-moving arena) but we thought it might be more to Keep them Company and so we dropped round, as asked, and kept up a stream of (hopefully amusing) anecdotes and Thoroughly enjoyed popping a few spice jars in easy-to-carry bags.

while we just Happened to be glancing around we *squealed* to see a 1921 book about Etiquette – the spice jars packed, we asked (shyly) if we could look.

“gosh, no,” we said, “but we’d like to borrow it and return it when you’re settled in your new place.”

“agreed,” he said, and went back to wrapping a priceless antique from a far east nation.

we have been So Busy these past few weeks, that we Quite forgot to read the book.

designed to help the perhaps ill-at-ease (new money?) American mix in le beau monde, it is Stuffed with helpful hints and careful Direction.

this was our favo(u)rite newly minted piece of knowledge.

we’re Dying to be invited to a formal dinner just so we can pop round within a week for a “viste de digestion”.

it was also Most Helpful for the American Abroad.

(remember this was written in the time in which Mr. Scott Fitzgerald set his own Fiction about Mr. Jay Gatsby – picture the scene, darlings).

when we are next in Germany we shall endeavo(u)r to pop round Before 5 o’clock with a teamgloria visiting card (yes, of course we have those – from our lovely friends at the Great British printing press).

the vocab. that the author provides as a guiding Index is also most intriguing:

darlings – it could be Preparing young Americans for a world of Deep intrigue and naughtiness!

so who was the Author?

apparently (we could only find one source to corroborate this so here goes) – Miss. Lillian Eichler was a copywriter in Manhattan who had to create an enticing Advertisement to get rid of a job lot of books nobody wanted.

her copy was so successful in obtaining Orders for the books (alas most were returned because the books were less compelling than her advertisement) that she was pressed into Writing a book herself.

so what happened to Lillian?

well, according to our friends at amazon, her name became extended so we assumed she Married at some point, a Mr. Watson, and continued to Instruct the new nation on matters of etiquette, more specifically in Letter Writing, inspirational quotations from the greats, an appreciation of the popular Mr. Charles Dickens and, in 1939, a fourth edition came out of her book Wee Moderns (quelle charming title) for younger Americans.

sadly we found no obituary.

we do like to find out what happened to extraordinary gutsy copywriters from the 1920s.

perhaps she came West to Hollywood and wrote “scenarios” (as the French call them) for Mr. Louis B. Mayer and worked out of the Hollywood Western Building, with a view of the Hollywood sign, and ate a grilled cheese with a Coca-Cola for her lunch at the counter downstairs while reading the Times.

are you having a delicious sunday, darlings?