waving to you from the couch looking at the Hollywood Hills while eating cucumber (chunks, not slices – easier with the fingers) and black olives (cured – they weren’t sick, but, you know, with olive oil and herbs and so forth)!

our plans changed (someone changed their mind for our assignation today – no, not a Romantic one – – – and at the Last Minute – work called or, it seems Demanded their presence) so we thought:

Oh well, let’s take a long walk up to the Sunset Strip and buy a slim volume of Jung from the clever people at Book Soup and then find some eggs and toast and tea at some glamorous hotel overlooking Los Angeles.

and then we Wondered why there were So Many People in black hauling lighting and sound equipment into the Sunset Tower. 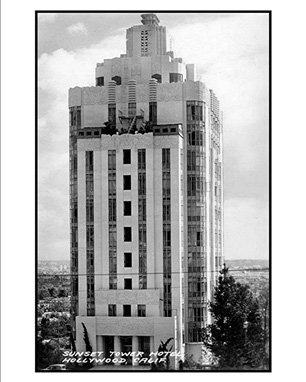 it took a while to Think.

and then we Remembered that the Very smart and opinionated Mr. Graydon Carter is having a party here tomorrow night after the Event (we met Mr. GC in 2002 – anecdote here if you’re curious…..)

The Academy Awards are Very Important in Hollywood (and we do mean Hollywood, they probably don’t mean that much to everyone who lives in the rest of Los Angeles, to be absolutely truthful) because then – depending on one’s possession of a fortunate gold statuette (or not), one knows at which Table in Certain Restaurants one will be sitting until February 24th 2014.

Justifiably so, many people get Rather jumpy this weekend – the stress and all that – so we hesitated on the threshold of the Sunset Tower, wondering if we could, in fact, find a table and some eggs and toast and tea behind which, and with, to read the slim volume of Jung.

But then we remembered we were wearing black (so could look like a New Yorker and thus “money”) and shiny-sparkly-silver-shoes (possibly eccentric money) and we have a British Accent (possibly married-to-money, a Magazine Editor or a Producer from the BBC).

we got a table.

and a very nice one. 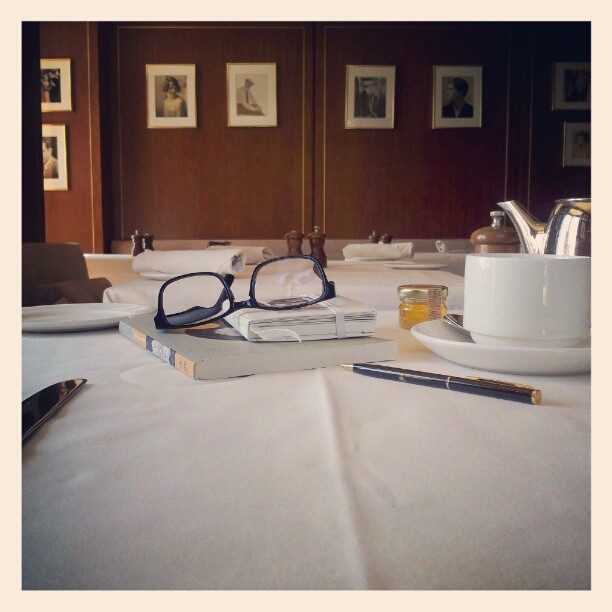 actually the restaurant was pretty quiet (movie stars don’t get up that early and they certainly don’t Eat the weekend of the awards until After the ceremony) but the beauty salon downstairs was Packed.

there’s some lovely ephemera on the walls of the Tower Bar (the Terrace where we like to eat was closed for Mr. Graydon Carter’s party) including this: 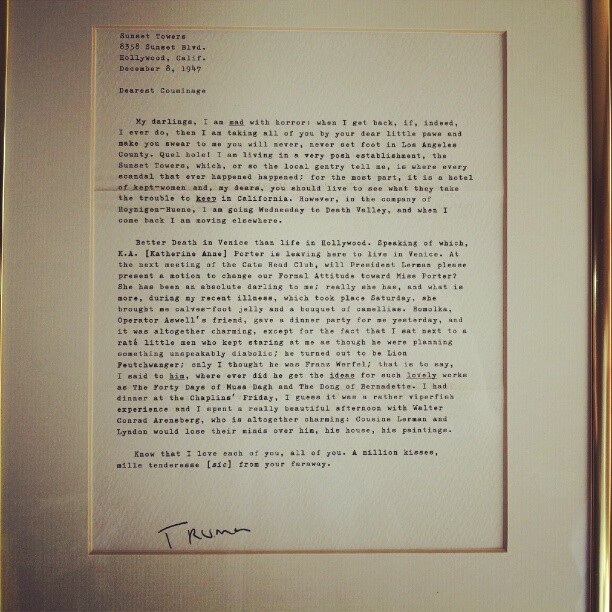 Yes. It’s a letter from Truman Capote to Leo Lerman (now remember that Truman liked to be naughty and be Rude about Los Angeles but he did come here quite a Lot so perhaps he had a secret affection after all).

While we were eating brunch, we just happened to check in with our friends in Berlin via the Interweb and saw that Julia had already answered our Questions (which came originally from Aubrey).

and Most Adorable and curious answers they are too, darlings:

* i am enchanted by everything that has to do with zombies, the tudors or disney villains.

* when i was seven i had such a big crush on pierce brosnan. i carried around a photot of him that i had cut out of a magazine and told everybody that he was my uncle from the USA.

the rest are Here:

we happily read them while sipping tea and then saw that she had re-nominated us with some New Questions.

UPDATE: before we give you our answers – George’s Responses are here and they are Most Splendid.

and here are Our Answers (briefly, as we must get ready and drive East for the Movies quite shortly…..but our responses are always less considered and more inspired as we’re sure you appreciate ;-)

9 thoughts on “sometimes there are more Questions than answers, especially while at the #SunsetTower the day before the Academy Awards”