and whenever we see (soft, misty, hair-curls-creating) rain (as opposed to torrential thunderstorms from east coast or perpetual dampness as per london) we think of PARIS (doesn’t everyone?)

we have a theory.

everyone that we’ve truly (in a mostly virtual and delicious way) connected with via the interweb is the Sort of person that one might have met at Shakespeare & Co, wandering-through Paris and thinking (deeply) About Their Future.

that Is indeed Meryl.

this theory has proved true more than Once.

we get to know someone (via their blog or Instagram or some such IP-enabled-fangled-Tech) and somehow or another the Subject of Paris comes up (doesn’t it always? – eventually – and especially with people who love books and chandeliers and it would be hard to be Friends in whatever with us without an Obsession or deep love of both) and then we find out YES! they also ran away to Paris at some point and stopped in at Shakespeare & Co.

In fact, we are convinced that everyone we love to talk* to via the magical interweb is the Sort of Person who would have passed through paris (and thus would have, at some point, been in need of a new Book and therefore gone to Shakespeare & Co) one (probably light, misty, rainy) day.

these are some of the delicious people that we follow-and-who-follow-us on Instagram (from Korea, England, Hong Kong, Wales, France, USA, Turkey, Germany, Italia, Japan, Australia, Sweden and other places that we haven’t quite grasped they might come from because they appear to travel a lot).

They are precisely the sort of people one would expect to meet at Shakespeare and Company. 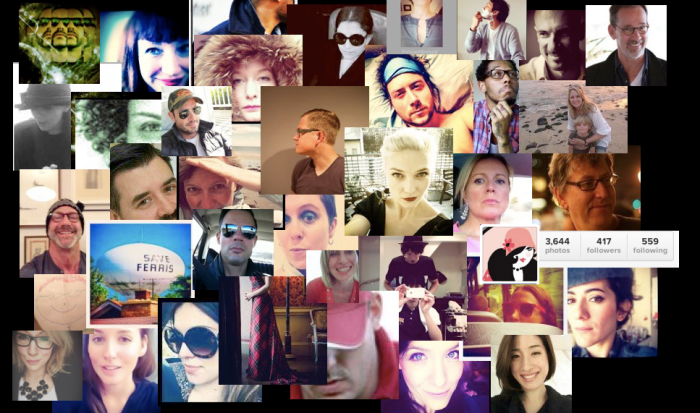 *sometimes we talk on the princess phone or online (in a typing-in-a-comment-box sort of a way) or – you know – when we know them better, in email or IM – OR sometimes we have tea with them when they come from Berlin or we find a taco stand in east LA and admire their Art and there are some people with whom our relationship has deepened over time from when we were anonymous (and going through you-know-what and they were Very Kind or those we know in RL but truly felt heard and seen by talking and going to Cornwall for a summer hols or by sharing online and the Many International connections which are all somehow intertwined from Australia to NYC to not-far-from-Cardiff to Istanbul and the Emerald Isle to Los Angeles and Back and beyond.

in fact, Some people we talk to have probably not just been to Shakespeare & Co but hosted or been hosted at a Deeply glamorous and Literary Event there…..

the theory for a rainy day in L.A………the corners of the interweb where we find each other = a massive shakespeare and co, Paris.

we couldn’t resist ending this post with not-quite-a-chandelier but Rather Parisian all the same.

actually – no – don’t go away – let’s have some Actual pictures FROM our prior trips to Paris, pourquoi pas?

even on a rainy day we’ll always have Paris.

and we’ll always have you – the Sort of people who would, at one point in their lives, have passed through Shakespeare & Company – and maybe we would have seen you, by the Simone de Beauvoir collection, frowning (prettily) over a commentary of some gloriously difficult yet helpful feminist text or, more likely, giggling over Asterix.