we needed a (great big belly) Laugh yesterday (we can’t explain but something happened where an Official Organization lost some paperwork and it has somehow and quite Probably Delayed everything but we Soldier On as they used to say which we guess just means marching forwards as opposed to lying around weeping into the back cushions of the couch. Mostly because they didn’t carry couches with them on Long Campaigns into the unchartered territories, we assume).

so we Took A Walk.

this is always a good idea – walking clears the air, the muscles get all taut and tingly and excited and some of that good stuff – the serotonin and the dopamine – bubble up into the psyche and give a good sharp Push to the sadness and Fear (lots of Fear) and disappointment and Frustration.

(that’s the sound that serotonin makes when it gives a final shove to the demons within).

We particularly enjoy a Walk when it ends up at the Cinema, because then one can not Only have a Rest but Enter Other Worlds before heading back down the hill to home once more.

and what another World we Did Enter.

A Glimpse Inside the Mind of Charles Swan 111 is extraordinary.

It is very Trippy.

Patricia Arquette rocks a 1930s turban and something silky with stacked cork heels. Bill Murray is well, Bill Murray, which is perfect and genius as always. Jason Schwartzman is the Zelig of our times. 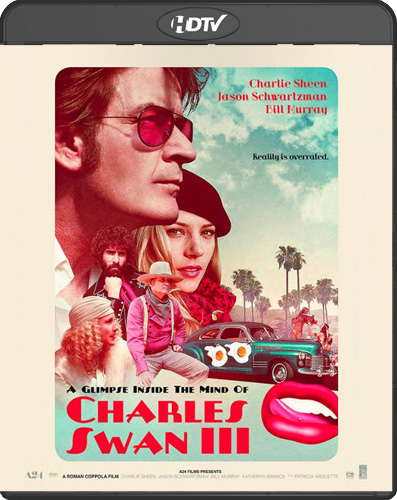 but it is Charlie Sheen who is the Revelation of this Tale.

For a start he looks like a Destroyed pastiche of Alain Delon from 1978.

The acting is flawless (whatever else one might think about Charlie – and we cannot Judge – everyone has their demons and most of us don’t have to work them out in public) he can Definitely Act.

and his performance is heart-breaking (and very funny) – it is so Knowing.

In fact if you had told us that Younger Mr. Coppola had communed with Satre and Camus over many a late night beverage at La Coupole and come up with this Tale of masculinity-at-its-nadir-and-despair and a turning-in-on-oneself at midLife and the rise of the power of networked women who share information and banish badness at Will – we would Believe you.

and no, we’re not sure Exactly what the Plot was (and they appeared to have run out of money so there’s not really an ending but there again it’s Perfect as it is).

we highly recommend seeing it.

BUT – only on Sunset Blvd and during the day and with only three of you in the Cinema with someone rustling crisp packets and doing a Beavis and Butthead laugh.

So that was popular culture medicine part I.

Part II was later on that evening.

Maria came to pick us up and we met up with JG and enjoyed a Night of Comedic Sketch Writing at The Mint (and this being Los Angeles, each performer had a line of Credits on IMDB as long as a long shelf of screenplays all bound with those gold butterfly clips at the Studios – so they were Jolly Good and very Funny).

the night was Hosted by novelist and writer Anna David and called True Tales of Lust and Love from Writers and Comedians and our favo(u)rites were a tale about a Ninja (complete with costume) from Sascha Rothchild  and subliminal crush on an apple-store-employee called Autumn by Annabelle Gurwitch.

it appears that we also adored the line about appearing in a Shakespearean play – considering we Tweeted it – but sadly we didn’t have a pencil to hand so did not write down the name of the performer (*guiltylooktocamera* – that Never happened when we were a Journalist).

the Mint was founded in 1937 (can you just Imagine what LA was like Then?) and now is all faded decadence and actual-vinyl-stapled to the ceiling just like in Trax (come on, you Must get the Molly Ringwald reference if you like to visit us here, darlings) but we were Most Excited to see…….

Laughter is definitely the best medicine.

and, strangely enough, Charlie Sheen also helped us forget our paperwork getting Lost somewhere in the (probably Industrial dark green) filing cabinets of some Official’s back office.

so thank you to chandeliers – and Charlie Sheen – and Maria who suggested a night down on Pico. Excellent Choice.

7 thoughts on “laughter is the best medicine: inside the mind of Charlie Sheen and down on Pico for Tales of Torridness.”