mondays (not in a skyscraper) are a Revelation.

we toured the city, doing portraits and picking up emails and sending out notes and frowning (prettily) while Helping answer Important questions but also spent a Great deal of time in cafes, picking over the best marmalade* to have on one’s bagel.

by the way, this post Might well be a long one – are you prepped with – if in London – a hot buttered crumpet – in Los Angeles – a raw carrot juice – and Berlin (guten tag, Berlin) – a black coffee and a cigarette? Off-season in the Hamptons? What does one imbibe up there? A hot apple cider perchance? Do. Tell.

This is our Good Friend Joseph (who is many things, but also a Poet, and the splendidly-bearded performer Brian Boucher, is seen here, reading one of Joseph’s works). We asked Joseph if we could meet him outside the main NYPL (near the Lion-on-theLeft, if you’re familiar with the Fifth Avenue location, in manhattan). But our photograph looks awfully as if we Stumbled upon Joseph while on a competing Tour of the Ancient World and we stopped, a while, to say:

“Oh! Did your tour go as far as Thrace?”

and he shared his latest translation from the original of Plutarch (with all the naughty bits helpfully explained with a wink and a sigh and a nod to the cleverness and allusions of times gone by).

Or perhaps we read too much into things (but we think not, actually, plus it’s fun to think-like-this-constantly – if a Tiny bit exhausting – for others, mostly).

Then we went back downtown – to the West Village – to meet up with Mary (who had a twinkle in her eye so we caught up on everything-that-has-been-going-on before we said, “quick! the light is going!” and we snapped two shots and luckily love them both). 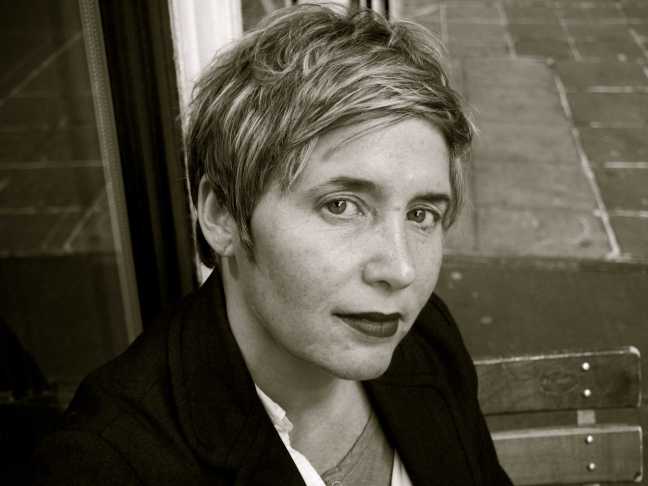 we need to digress a tiny bit (do you need to make another pot of tea in england? we’ll wait…)

so, where were we?

(because we did actually want to be a Spy – and still do – apart from the fact that we hear it actually entails not that much poker in a tuxedo in cascais and probably more paperwork in a dark office off the streatham high street than we’d like – but we got dejected in early exploratory discussions regarding the Foreign Office as we have Foreign-born Parents and apparently, in those days, that was Not Allowed by the Crown – shiver – isn’t that awfully glorious?).

what else can we tell you about the past day or so?

we started our re-enactment of Twice Over Lightly – picking the East Village – although their definition of the East Village was rather Broad so we’ve done the same – as our first port of call (not strictly a Port, we know, but you understand what we’re driving at – although we weren’t driving – we walked there).

so here are our photographs to accompany the words of Anita Loos and the observations of Helen Hayes from their 1972 book. 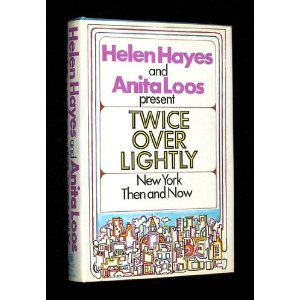 This particular expedition had an incongruous start at the Spanish Pavilion, an expensive restaurant on Park Avenue frequented by sybarites. Our publisher and host, a man of tremendous dynamism, spoke up briskly. “Of course you’ll go to the East Village,” said he.

Helen and I had already discussed that idea so she was ready with her answer. “Not under any circumstance.”

………..”the night people of the Village were abroad after the show, and on our way to the parking lot it was downright scary……….they were clustered among their motorcycles smoking homemade cigarettes, and we knew what those were. Several of them were locked in alarming embraces…….I am really too cowardly to be of much use in the East Village.”

P. 59: “The East Village is the neighborhood most recent populated by the now set.”

Isn’t that lovely? The Now Set. We might have to start using that one….. 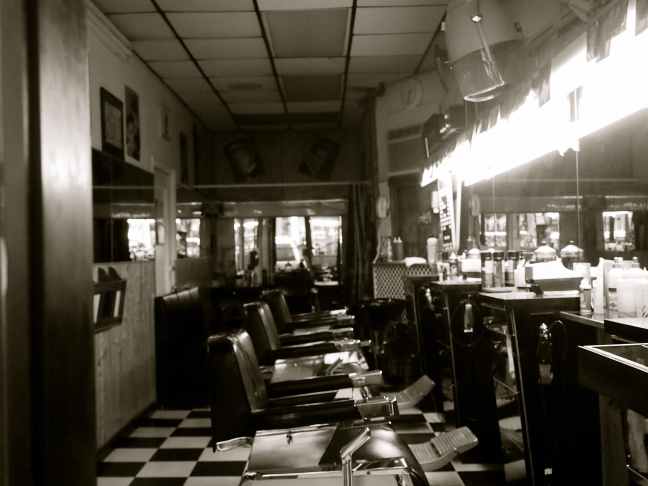 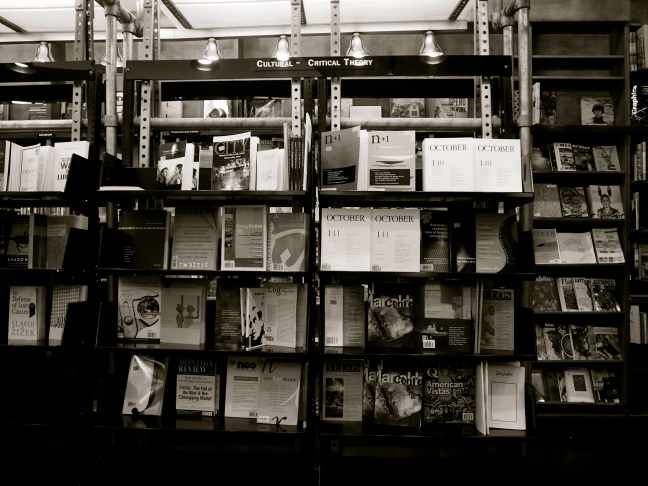 and here’s where the Now Set stock up on Barthes and Derrida, darlings.

and here’s where the Now Set go for their Theatre-fix (and a dose of cultural theory in action – we’ll be there for this event – will you? Fancy a black coffee in the lobby beforehand?)

and we tried to find a picture to go with this quote from Anita Loos:

P. 62: “That’s the great thing about the Village: everybody has always thought his bag was just as important as the other fellow’s. The Village is no place for those who enjoy competition and belong in the thick of things. The Village is Paradise for the insecure.”

but the nearest we came is The Smile (the photograph above is the tea-lights-in-mason-jars twinkling on the ironwork steps leading down into the cavernous welcoming bistro itself).

we cannot say whether The Smile is part of the Paradise for the Insecure (although there were plenty of people with moleskine notebooks, scribbling furiously, so it probably isn’t far off – and yes, our own moleskine – #141 – if you’re curious – was Most definitely out on the wooden, wax-dripped-on, table by the window).

but there were a few Ezra Miller beauteous and androgynous types therein.

so this final quote from Anita feels apt:

“Greenwich Village is the only spot in New York where you can go out for the Sunday newspaper in your pajamas and bare feet and nobody pays you any attention.”
P. 62

we’re dying to find a photograph of someone in their PJs and a copy of the Sunday Times under their arm……..if we do, we’ll update this post and let-you-know.

it’s raining horribly in manhattan and we’re safely and warmly enveloped in the local library – surrounded by chaps in black t-shirts and beanie hats staring at their screens and a woman in a vintage Burberry trench coat reading a romance novel in the corner.

*re. Marmalade Question: we think it’s this one – what do you think?

4 thoughts on “not another manic monday: east coast portraits and twice over lightly part 1”