so there’s a naughty newsagent (we shall not disclose their particulars) that takes out the supplements from the Sunday Papers and makes them available, for a (not unreasonable) price.

and considering we no longer stomach the reading of Vast newspapers on a sunday (the weekend FT meets our needs and its peculiar salmon color/colour/shade is rather appealing) we are glad they do.

for otherwise we would have Missed this delicious piece on The Moth by the utterly glorious Joan Juliet Buck. 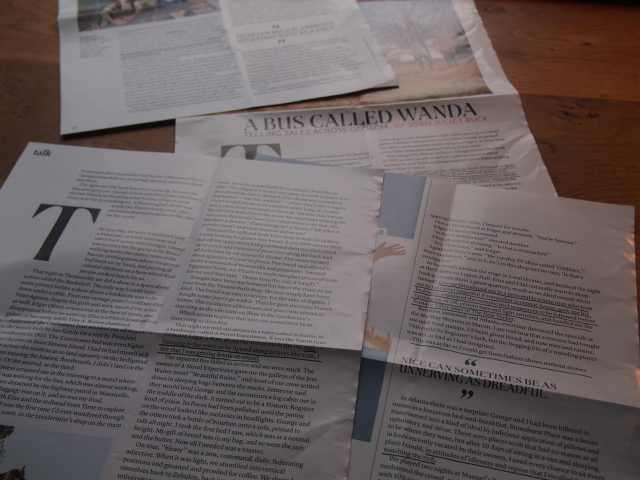 the story is a splendid tale of travels with a band of raconteurs – much in the spirit of the roaming celtic Seanchaí in eons-gone-by who entertained, inspired, agitated-with-raw-and-beautiful-new-ideas from Abroad and came to the hearth for comfort, connection and to earn passage to new lands as soon as the sun rose warm in the sky once more.

Across the Atlantic, as the editor in chief of French Vogue, I watched a thousand fashion shows without stories and developed an urgent need for stories without fashion shows. The Moth was everything I longed for.

…….listening to the notes as he tiptoed along octaves like a cat, I felt that I was getting drunk on sound.

I bounded on stage after Elna, feeling pumped and primed by the crowd, as powerful as a soul singer and as centered as a poet laureate. There was a difference between a sober bookstore audience and a drunken mass of educated youth; the first had listened, the second carried us.

I was replete, exhausted and happy.

and there’s a moment near the beginning of the piece where we suddenly felt an easing-in-the-chest (for there had been a panic recently, which we’ll explain after the Quote).

The comedian-writer-direct Buck Henry was there, and George Plimpton, the writer-sportsman-editor-actor, and the novelist and improviser Jonathan Ames – all hyphenates. No one there did just one thing with their lives.

Yes. Joan Juliet Buck is a hyphenate too (although prefers commas in her Twitter profile and yes – did you notice – blush – she follows teamgloria #sigh *smile*)
And that’s what we’re becoming (you know – who we are in Real Life – we’re staying Perfectly-gloria over here, fear Not). So – a hyphenate – and we’re not sure exactly what configuration of words that-hyphen-shall-be. But it seems to annoy people. Why is that? We’ve had several agonizing conversations that teetered into Awful Silence when we said we didn’t want another Big Role. It seemed to irritate people beyond belief. But, darlings, when you’ve had the office on the 41st floor with your name etched into the glass and a view-over-the-Hudson and long haul flights to China, INDIA and Paris and Milan and beyond (whatever is beyond Milan, we’re not quite sure but you know what we mean), surely one can take a step back and – you know – Do Something Else? Apparently that’s going to separate us from a few people moving forwards. Hmmm. This happened almost 20 years ago (yes, we’ve been working That Long) when we stopped doing one thing and started a (longish) pause before doing something else. We remembered an agonizing moment on the telephone (before mobile phones – yes, we’ve been around That Long) when we dialed a familiar number and their assistant answered and we said, “It’s_______” and they said, “from where?” and we gulped and looked around the not-at-all-glam-flat we then lived in, more a set of rooms really, and we don’t mean the Albany, sadly, and said, “um. from nowhere, really, right now.” Yes, the call ended. We did not get put through. But that’s a long-forgotten pain (yes, we lie). Because we’ve moved on. We’re now a hyphenate. Of sorts. And, thanks to Joan Juliet Buck, it’s an Utterly Glorious Thing to Be.

2 thoughts on “becoming a hyphenate.”