so, um, we’re not sure how to talk about our new life – or rather the in-between-bit of our  life – the gap the moment that is no longer the life-we-had-in-NYC since 2006 and the life-we-will-have-in-LosAngeles (which will be, we are assured by friends more Experienced in such Matters, will be Quite Different to the Life-we-had-in-LosAngeles from 2001 – 2006).

you can tell we’re confused ;-)

and who wouldn’t be.

we’ve Transitioned to a new role (“special advisor” which sounds delicious and helpful and in-between-ly) at the skyscraper (and thus not In the Skyscraper anymore) and will be doing a little Consulting (rather curiously interesting projects) and going onto An Advisory Board (so sophisticated!) and also taking a “producer credit” (for doing something real, not the “associate producer credit” that Mamet mocks in State & Main, darlings) on an international television production.

we’re also doing a lovely project and photographing all the People we Love on the East Coast before we Leave.

and we’ll probably have to come clean about who we are (due to the imminent book-shopping-of-our-picture-book).

But, darlings, in the meantime, we sent a text (so modern) to a Friend who is also transitioning (not gender but life-stuff) and said:

there’s a movie set in Chinatown that’s shooting near your house – want to go and find it? 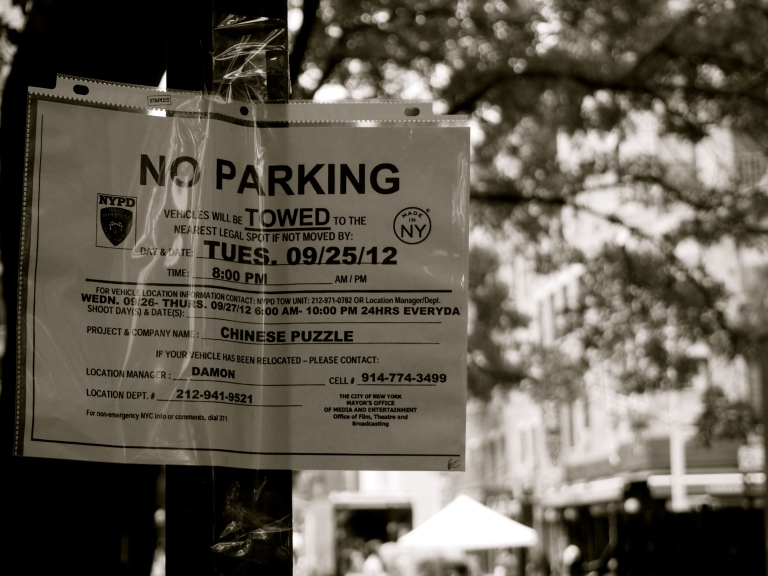 meet you outside the coffee shop then tomorrow – early.

we met on the corner.

you’re a sight for sore eyes.

which is always lovely to hear ;-)

and we made our way around the block to find the Movie Set (it’s the new one from Cedric Klapisch and we were hoping to see the lovely Cecile De France but clearly she’s not in the Scene with the Chinese dancers in a playground with blue ribbons).

so no CDF but we think we spotted a lot of the French film-crew (this being the bit set in the USA of course there was a NY-based Unit as they say in Hollywood), it’s so hard to tell when everyone, despite their country of origin wears Levis or Diesel jeans, Converse and puffa jackets. apart from the man in boat shoes and shorts and we have a feeling he had an associate producer credit anyway.

then we both walked back around the block, took a few more pictures and settled onto a handy wooden bench as the world was waking up and talked while sipping from white to-go paper cups and slipping into the dark embrace of caffeine.

so good to start the day with hope, talk of Latin America and Rome and new beginnings and love and ideas and what’s-next-who-knows (pause for effect, nervous laughter, sipping of coffee, smiles, re-settling into hope once more).

and then, en route to home, we stopped into mcnally jackson to see what today’s reading companion might be and there he was:

and we were thrilled to see other people have lives that include reading-in-bookshops as soon as they open too.

especially good to see other people like sparkly footwear.

we may purchase some sequin-ette-pumps ourselves.

we used to have a pair in Los Angeles.

and maybe we will again.

darlings – we must dash – phonecalls to make, people to see, a tea at the St. Regis with a writer-chap-we-admire-greatly (perhaps more on That Later, if he allows us to divulge our conversation) and then The Ballet.

this new life is rather Marvelous/marvellous/miraculous.

And – if we’re being Totally Honest – a bit scary.