Whatever happened to Fay Wray
That delicate satin draped frame
As it clung to her thigh
How I started to cry
For I wanted to be dressed just the same.

picture this: a slightly gritty cinema on the lower east side of manhattan, a world away from NYC-at-Work (this being the land of knishes and artists and graffiti and people who turned the wrong way down Bowery and got lost on their way back from their hotel and wondered where all the speakeasy-joints-turned-bistros have gone) and the only thing at the movie house was a 1PM showing of the Perks of Being A Wallflower which looked a Lot like a teen movie (shudder) and nothing that teamgloria would see/cover/discuss_earnestly_overblackcoffee after.

we needed a movie.

you know how That Is.

so we bought a ticket.

at least the fine and slightly dangerously off-kilter Ezra Miller was in it and we had so enjoyed him in Another Happy Day.

we never sat through the movies about a teenage wizard (because we went to an English boarding school and nobody told us there were Wands hidden inside the oak cabinets imported from some exploited former colony that we could have used to get out of compulsory sports on a saturday morning and be Left Alone to study Plutarch and the sensual portions of Catullus’ work In The Library) so had no resonance with Emma. Although any small american child of our acquaintance has assured us that we are “A Grown-Up Hermione” – slightly troubling but probably true.

but a movie is a film is a stolen few hours in the dark with the dark embrace of caffeine and a space to feel – so we took it.

plus we just saw a statue from INDIA en route to the brunch place so all signs were portentous for a good experience.

oh, little did we know.

now – it’s been many years since we suffered through our Slightly Awkward Years (well, the ones where we were actually at Teenage, in age) – but it appeared that the movie was not set in Modern Times (hard to tell, all teens appear to still have a hankering for vintage – vintage now, being the same decades that We all enjoyed as teens – confused? you will be.)

so there was talk of foreign films and love and being different and getting punished and finding the One Teacher that got you (and handed out copies of the Great Gatsby) and panicking about kissing-on-the-sofa while wearing a poufy-80s-dress (one of you, perhaps both of you) and drugs and drinking and scary stuff like The Future and finding friends to be your family because your real family doesn’t get you (or dies horribly in a car crash upon which awful revelation one’s mental illness hangs in the balance for years).

and soul-ful and meaning-ful and full of allusions and ideas and the despair of Youth coupled with the secret ties that bind and all of this to a soundtrack of Bowie and if we’re not mistaken, a moment of Siouxsie & the Banshees, and a beautiful outpouring from the tortured soul of a generation.

just look at this soundtrack (as mentioned in the original book written by Stephen Chbosky which, apparently, is BANNED, in several states – how is this possible people?? and we’re so excited that he got to write the original screenplay and DIRECT. #sigh)

yes, we had massive flashbacks too.

guess who was a producer on this strange and beautiful and twisted and daring cinematic experience?

yes. indeed. the strange and beautiful and twisted and daring Mr. Malkovich himself. not just a glorious actor and elegant man-of-words but also a fine man of the cloth (Italian threads, not ecclesiastical robes) these days:

we can see that he would have been a fine addition to production meetings on this movie – and probably added a Great deal to the background reading list for the young actors preparing to play teens-before-cellphones-and-the-web.

when the collages one produced were on one’s bedroom wall not some virtual Wall that everyone can see (yeah, even the people you don’t know are looking – shudder – which is why you won’t find us there – even in RL – especially not in RL)

today, apparently, teens can do their “mash-ups” on the interweb – like here – where there’s some adorably aching quotes from the movie to share and sigh over.

but back to the movie.

why was it so good?

and was it only because it was a Friday at 1PM and we weren’t working (for another time, that one) and we were Feeling a lot about Everything (brings back memories and it was sort-of-funny to watch that bit on-screen – the feeling-everything-ness of teenage years) about moving and leaving and moving on and planning and plotting and – you know – stuff (cue: shrugs shoulders, runs upstairs, slams bedroom door, plays The Smiths really loud).

we don’t know how You’re feeling right now so we’re not sure you’d feel the same way about the film.

what we do know (for sure, as the divine and mighty Oprah says) is that this is a Big Screen experience – especially when they crank up Bowie and appear to fly through the night sky from the back of a truck going nowhere.

Though nothing, nothing will keep us together
We can beat them, forever and ever
Oh, we can be heroes just for one day

but the seminal cultural experience and reference of the text (as one would say in semiotics class while frowning – prettily – over Barthes) had to be – in the final analysis – this strange and beautiful and twisted piece of celluloid.

at the risk of turning this into a post-grad-class on multi-layered cultural experiences, we note, with a shy smile, that our first exposure to Rocky Horror was inside another movie: yes, the original Fame. 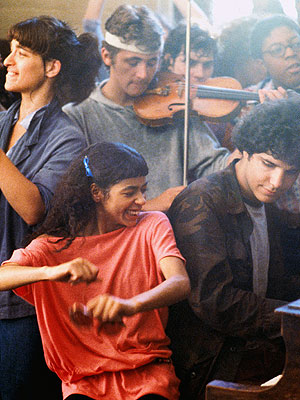 We recall STARING at the screen as Doris comes alive at a midnight showing and then suddenly starts wearing vintage drama student outfits and getting a life and then it all gets Really cRaZY and we were hooked (at a very young age) and, oh god, it’s all starting to make sense…….

Doris Finsecker: I mean, if I don’t have a personality of my own, so what? I’m an actress! I can put on as many personalities as I want!
Montgomery McNeil: [raises his glass] To schizophrenia!
Doris Finsecker: [also raising glass] Abso-fucking-lutely!

so – in Perks of Being A Wallflower there’s a similar de-coupling of Real Life and Rocky-life and everything becomes hazy and divorced-from-reality and yet starts to come together for the First time and then we hear The Smiths again.
Just on that note – let’s pause there for a second:

isn’t it ironic that Morrissey lives in Los Angeles now?

good for him.
reaching for the light and sunshine and drives down Mullholland at dawn.
or for benediction via Tim Curry’s fishnets is probably the best thing to do when one is sad and misunderstood and everything is Just Too Much.
we hear there are still midnight showings in the Village of Rocky Horror.
hmmm.
that would make a delicious post for teamgloria, non?
maybe we will…….
in the meantime, we will go and download a playlist from the movie and lie back on the bed and stare at the ceiling and wonder when this will all end.
ah.
the pain of youth, revisited.
exquisite in its clawing reality.
one. last. anecdote.
we met Richard O’Brien once.
just briefly.
in a pub opposite the English National Opera, in London.
it was place that actors hung out in during the day (because no one was working) and had a general sense of malaise and doom and depression – sort of perfect for a drinking hole.
we didn’t recognize him at first (because everyone in London looked like him at a certain time of day in those days) but then we did – and we just stopped and he looked up and we gasped slightly and we locked eyes and we silently thanked him for helping us realize that we didn’t need to be normal or fit-in or do Anything That Was Expected of us and he just did a strange half-smirk and weaved his way on those extraordinary punk-performer-thin-legs and spiny stance and we sat down and started to write.
and we haven’t stopped since.
funny enough, he’s in Los Angeles a lot now too (doing the voice for a cartoon for Disney – we were on the Lot last month and somebody mentioned the cartoon – we didn’t know what to think – sort of glorious a turn of fate, really).
the dark are drawn to the light eventually.
or Not.