we needed to blow the cobwebs from our head and so headed downtown, to the financial district, to catch the east river ferry – and then proceeded to ride it, without getting off, up and down, letting our hair get deliciously tangled in the waft-y breezes and spray from the boat as it turned into port and out and up the river and back down again. 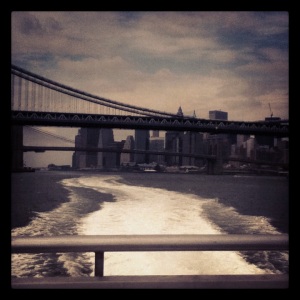 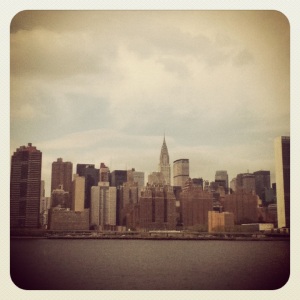 we stopped off, briefly, at DUMBO and found the restored 1922 carousel was open!

of Course We bought a Ticket!

and Yes we Rode the carousel, darlings (complete with black trench coat and large dark glasses as if on a day trip from the Politburo but dressed for the job, just in case ;-)

after the day on the river we headed back up into the financial district and sauntered uptown, newly acquired freckles on our nose and cheeks and windswept-of-hair. 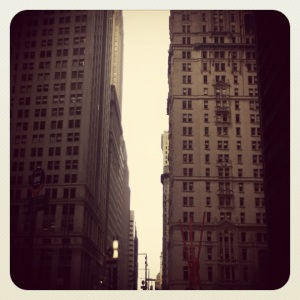 a last moment to leave you with……….as you know, we Rarely take photographs of (real) people but this couple were just too lovely and we had to capture them on the ferry as it pulled into the pier (right by the Wall Street heliport – from (almost) the last scene of the Thomas Crown Affair) as a matter of fact…

this is our homage to Doisneau – aren’t they heartbreakingly lovely?

almost makes one eager to be in a rather delicious love affair……almost, one might say, if not cautiously then with a wry smile and memories-of-temps-perdu-or-if-not-lost-then-recalled with some Rue and amusement and perhaps, yes, a Tiny bit wistful.

not to get into Too Much detail, we are Rather hopeful about one’s future.

we seemed to have reached a “breakthrough” or least a Most Interesting Juncture in therapy.