have you watched this?

we’ve followed Kara for years (we emailed each other first in 1999 – just a “hello, fabulous-fellow-person who also loves the internet-and-stuff”, although we’ve never met – we almost met, in a hotel lobby, in San Francisco, for a pot of tea and an actual hello face-to-face, but it didn’t happen)

it’s impossible not to admire someone who has a stroke and turns it into something incredibly life-affirming.

we relate, as the Americans say, as you know, darlings.

and clearly embraces her inner sparkly-ness too.

we’ve got an outer sparkly-ness today. one of our pearl(ish) bangles (looks like Dior – actually from one of those shops teen girls hang out in, as we’ve said before, forgive us repeating that line but we Really Like It) was a bit stretched (yeah, nylon string apparently) and we threw it in the garbage/bin/receptable_of_rubbish but the cleaning lady at our Day Job in the skyscraper we work in (her name is Julia, we met her the other night when we worked late and she said “Oh! I wondered what you looked like!” which was Delicious and she explained it was because she likes all our pictures and roses and divine objects scattered/placed_elegantly around – we giggled, prettily, in response and beamed).

anyway. the bangle was carefully placed on our desk by the computer this morning when we got to the Office.

clearly Julia (and the Universe) don’t think the bangle is dead.

we don’t argue with Julias or the Universe.

especially when we’re Very Tired (but in a good way) from having been At An Event last night.

at the Monkey Bar, no less.

it was a very late night, for a school night, but we felt inspired by the once-speakeasy-joint to take our morning coffee in bed, this morning, and read Swifty.

Swifty would have appreciated Kara’s talk, we are sure.

especially on a day like today with Quelle gloria(ous) nimbus (nimbii?) in the heavens. 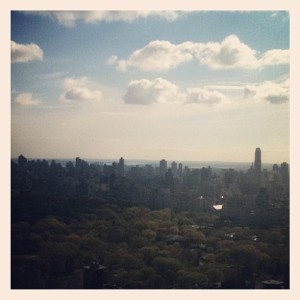 have a gorgeous day, darlings.

must get back to the Day Job.