we had wanted to write So Badly (that didn’t sound quite right – clearly we wanted to write Very Brilliantly) – we meant we were Desperate to express ourselves using the written word after a Long Time of not doing so, since we became something of a Suit .

the Day Job (shhhh!) came with a Great deal of deeply Interesting Travel to exotic places so we wanted to ‘document’ That.

Many Moons ago, we had paid our way through University by taking Photographs and dearly wanted to start shooting again (and looking to a future of photography books and small-but-beautifully-curated-exhibitions at Staley Wise and Peter Fetterman, please ;)

In fact, that week – we had Just returned from Washington (yes, we went to That House Of No Hue and yes, the Man himself was there, in the same room (oddly Versailles like to be honest – the decor, not the Leader of the Western World) but as we didn’t shake hands, we cannot say we’ve Met him (although we Have met Debbie Reynolds and Boy George and Sir Ian McKellen and William Shatner and Many Other Most famous personages, darlings) per se.

we had also (under Yet Another pseudonym, blush) had one of our Short Plays performed in NYC (most definitely Off-Broadway, in fact, as we recall, somewhere deep and dive-y and east village-y but Awfully Hip).

so Much has happened in twelve months………

Patience is Not our strongest virtue.

and we just wanted to say how much we Relish (in a lip-smacking, beaming-at-you-way-from-the-sofa-in-SoHo) – yes RELISH – talking to you, while we see everything unfold.

Please keep talking in the comments bit below.

You have No Idea how much we Squeal with excitement and Joy (often on the subway platform, heading to the sniper-fire-of-midtown-manhattan) when we get a little notification that There’s A Comment.

So this is most definitely a Shared Experience.

and it is Utterly Delicious.

Thank you for reading.

Love from us at teamgloria, darlings xxxx 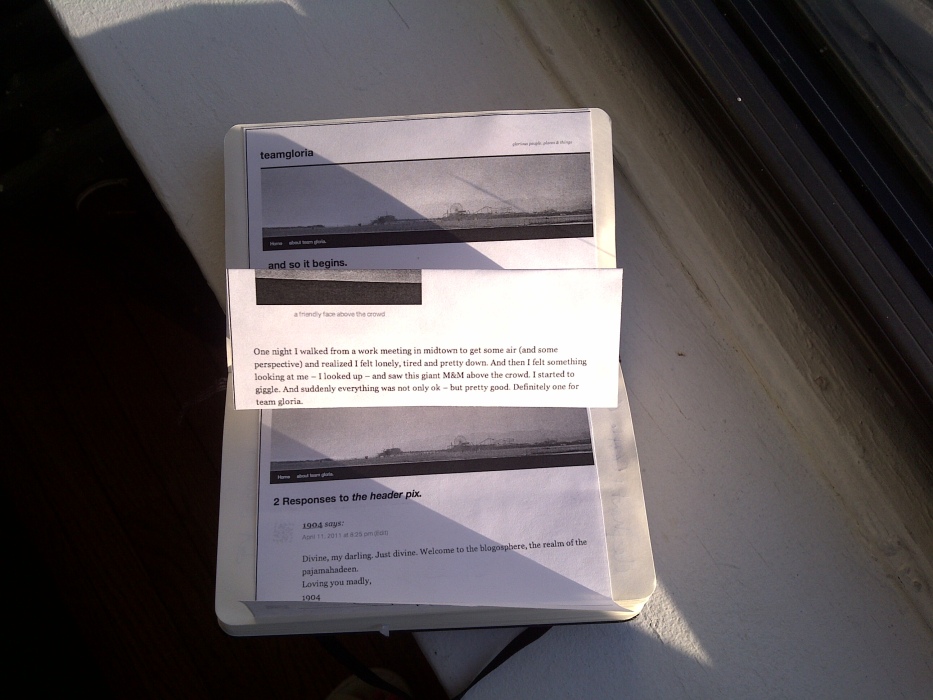 9 thoughts on “a year ago today: starting to become gloria(ous)”