lessons learned yesterday – people who need people (thank you J_actor_friend for lending us the EXCELLENT Barbra TV specials from the 60s+) and our slow realization/awareness that we are ceasing our island-ness-self-sufficiency-we’ll-do-our-own-lists-darling-thank you……to team gloria becomes an archipelago – we can’t even walk outside the apartment on our own (too pathetically – in a Victorian maiden sense – not a cruel one – weak and wounded) and so a troupe (a veritable troupe! of real and virtual friends) are needed to get us through the day (the mental health being verging on dubious at the best of times – akin to genius they told us in our extreme youth as adults gathered around to watch us play chess – not always the most helpful upbringing to be fully socialized with other (well, normal) children (we always found the outcasts and the wounded and still love Their Company, naturally ;-)

so here was yesterday’s delicious group of friends who came to call – they spoke – we whispered – they walked us round the block and let us pause ever so frequently on a wooden bench outside a small cafe while they got us a decaf iced no sugar to soothe our VERY SCRATCHY AND SORE THROAT (just in case you didn’t get that – it bloody hurts):

we awoke late – (didn’t) admire the bruises appearing on our body from the calcium draining away (we keep popping the interminable amount of pills but apparently this is normal) – we supposed we DID just go through a hellish surgery and the heart monitor burn is now a veritable battle scar and we’re sort of Proud of it – which is worrying – (but not to our friends who saw us in the very late 80s in dodgy clubs in sarf’ london where-the-cabs-don-t-go) and finally got dressed (who knew it took that long when it’s not as if we have a vast array of wardrobe choices being more of a uniform sort of a person in the Jean Muir sense, darlings).

Jonathan (our actor friend) came first – gave us beautiful gifts – and then, after a short walk, we curled up beneath our black (yes, hard to find, but so much nicer) pashmina and the grey/gray cashmere scarf that Cindy sent us from the Other Coast but Further Up (yes, SF) on the sofa and he read to us from Armistead Maupin (this will be one of the themes of our recovery from surgery so bear with us).

then one of our Very Glamorous/Chic Friends (from Abroad) came by (delivered by a driver – isn’t that too delicious?) and we looked dubiously at her feet while asking her to take us for a walk (see picture – HERMES – we know – So Rare in the house of Doctor Martens ;-)

“no problem, dah-ling” she said and reached into her (chic) bag and brought out some Capri type sandals (yes, they Were Chanel) and took us for a walk.

then we sat for a while and she talked and we twinkled at her most excellent anecdotes.

MORE FLOWERS ARRIVED: it was like Gertrude Lawrence’s dressing room here yesterday (and we have to say we are a tiny bit – ok – a lot – sad that not a peep from the Day Job) 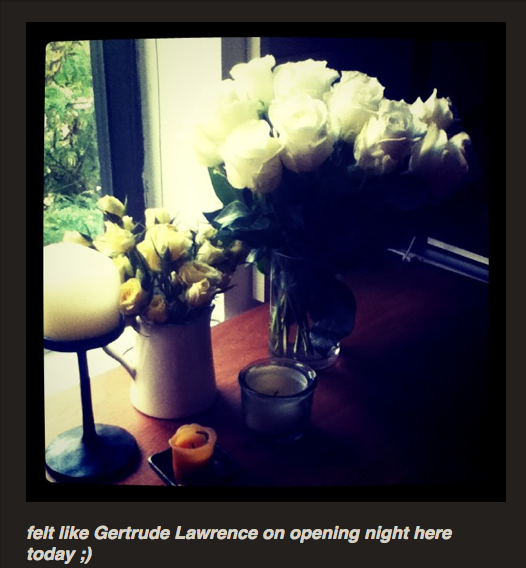 and then we had to sleep for a long time – this illness as a metaphor is little more than extreme exhaustion not sure how Susan S got an entire book out of it.

much later in the evening, our lovely friend B (one of the Bs – this one is of the very chic shirts and slim denim look – when he’s not in drag, that is ;) came to take us round the block again and then we had a little supper. we were “totally over” the rabbit food and needed a luscious omelette and a (small) side of (cut up into tiny slices) fried potatoes with salt (the salt being a crucial ingredient).

so there you have it – not a lot of action – but a Ton of Friends.

see – we’re not so much of an island anymore.

a rather Cute Archipelago if we do say so ourselves.

let’s not forget this when we have to return to the sniper fire of midtown manhattan.

(btw, we cancelled/canceled a few subscriptions to periodicals that just aren’t us and it felt liberating – we really don’t care – it seems – who knew?)